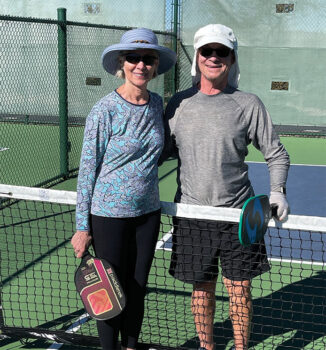 From Jeff Smith, Chairman, Communications Committee: There has been a lot of chatter lately on the courts about rule changes. One in particular (when is the ball in/out?) has not changed for several years and remains the same for 2022. Basically, if the ball touches the line, the ball is in. The ball is out of bounds if its point of contact with the playing surface is outside the edge of the line. The following report was submitted by guest writer and SaddleBrooke Ranch Pickleball Club member, Steve Dumas. Steve is a credentialed referee with the USA Pickleball Association. He shares information on rule changes for 2022.

On Jan. 1, 2022, the USA Pickleball Association issued a revised rulebook. Unlike the previous three years, where there were a significant number of rule revisions, in 2022 there are only four rule changes that affect recreational, nonofficiated play. Going forward, I anticipate that there will not be that many rule changes, and future changes will be primarily rule clarifications.

The Rules Committee has renamed the conventional serve, where the player releases the ball and hits it before it bounces on the court, the Volley Serve.

This rule outlaws the “chainsaw serve” or any serve where players use the paddle to impart added spin on the ball. If players wear a glove, they must not induce any spin on the ball at release. If they intend to spin the ball, they can use a fingerless glove as long as no part of the glove contacts the ball. There can be no band-aids in contact with a spun ball.

Another key part of this rule is the release of the ball must be visible to the receiver.

For 2022, the drop serve is no longer provisional. The server now has the option of doing a Volley Serve or a drop serve. And similar to the volley serve, the release of the ball must be visible to the receiver.

Rule 4.K: Wrong Score Called. If the server or the referee calls the wrong score, once the serve is made, play shall continue to the end of the rally and the correction made before the next serve. After the serve is made, a player who stops play based solely on an incorrect score call will have committed a fault and shall lose the rally.

7.N: In nonofficiated matches, players may carry additional pickleball(s) as long as the ball(s) are carried in a way that the ball(s) are not visible to their opponent(s) during play. If an additional ball that a player was carrying falls on the playing surface during play, a fault shall be declared.

And a warning to tournament players: Referees are being instructed to penalize players who throw their paddles and slam return the ball to the server during rallies. There is no place for that kind of behavior in the game.