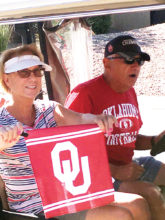 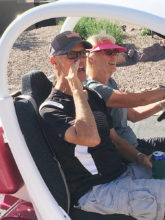 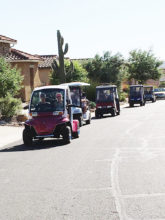 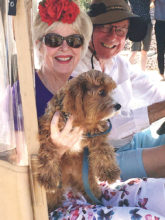 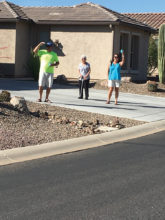 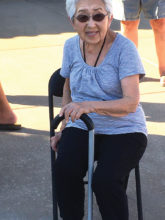 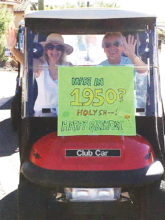 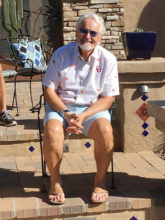 They came to parade on Arroyo Grande! They came walking, biking, driving golf carts and cars. They came with signs, cards, and gifts. Over 60 friends came to wish Wes Hurst a surprise happy 70th birthday! Wes was born in 1950 in Chandler, Okla., on Route 66.

Some of the messages that he received are, “Look Who’s 25,550 Days Old” by Steve and Beena Ordahl, and “Made in 1950? Holy Sh—!” by Mark and Arlene Wong. A Wes favorite, of course, was the OU (Oklahoma University) cart driven by Sam and Kathie Calbone. John and Sheila Bray brought their new puppy, Lucy, out for the excitement, and ever the British lady, Sheila wore a pretty fascinator. Neighbor Sue Uriyu Sent, who is 96 years old, was seen on her driveway thinking, “So Wes is 70, hmmm. Now the 90 milestone is something to brag about.”

Eric and Sue Hanson came by bicycle, and Joe Hough and Linda Bowman didn’t hold back as they led the parade. Wes watched the surprise parade from his front yard and was very touched. Thanks to all of the kind friends in our neighborhood. My apologies to friends who didn’t get the message. Happy birthday, Wes!