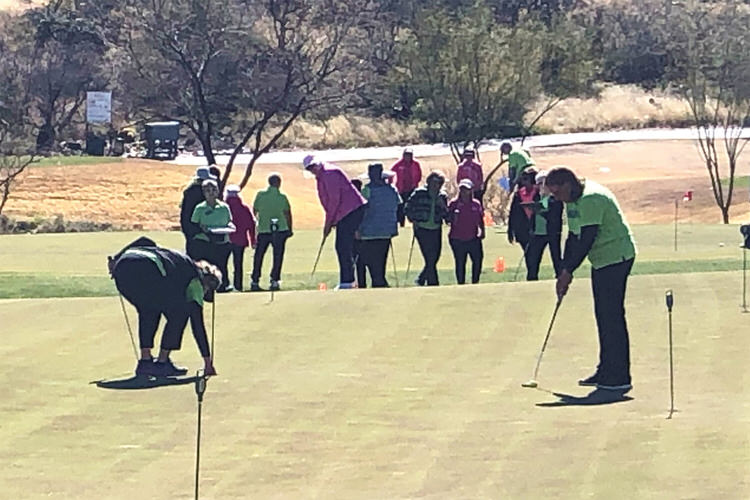 Activity on the green

The putting greens at SaddleBrooke One appeared to be full of spring flowers as the Ranchette Putters (in pink) were hosted by the Verde Sputters (in green). Members of both clubs enjoyed a picture-perfect day, while trying to read the challenging 18 holes. A delicious lunch at the Vistas followed the event, where a beverage station included the ability to make customized Arnold Palmers.

The Sputters’ event committee chose a St. Patrick’s Day theme for the outing. On the greens, a lucky clover indicated the starting point of each hole. In the dining room, green derby hats containing shamrock plants were the centerpieces at each table. An Irish lassie’s name and a four-leaf clover tea towel decorated each place setting. Later, the lucky lady with the lucky name took home the centerpiece.

A total of 72 putters—36 Ranchette Putters (RP) and 36 Verde Sputters (VS)—were divided into 18 blended teams, which contained two players from each club. Prizes were awarded to the three teams with the lowest averages.

The room went silent when it was announced that a special award was being given to the team that appeared to be a little ‘putting challenged’ and turned in the highest average. Those prizes went to team 18: Jan Deschamp (VS), Susan Eggleston (RP), Karen Martin (VS), and Nancy Eisenstein (RP). However, with the difficulty of the greens at SaddleBrooke One, that award could have been “won” by many of the teams.

The Ranchette Putters want to thank our hostesses, the Verde Sputters, for a delightful event. The time spent together demonstrated what Putters is all about—ladies having fun, testing and improving golf skills, and making new friends.