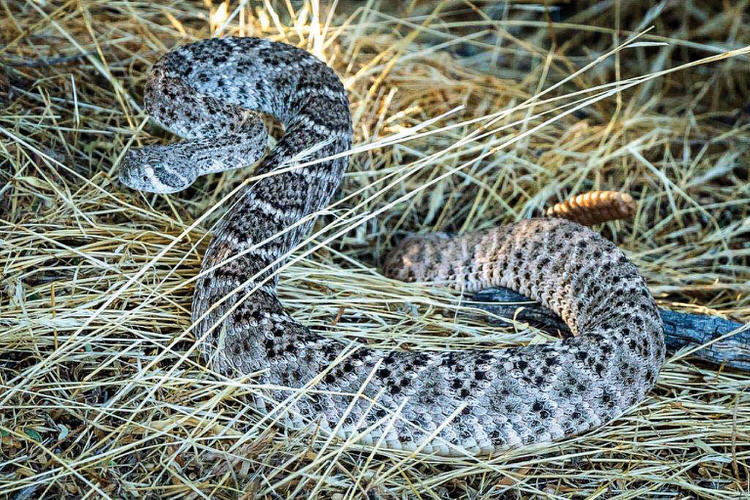 Sheilah Britton, Pinal County Master Gardener
Snakes and serpents have always held a sacred place in religion, literature, and mythology. Interestingly, they seem to be the yin and yang of symbolism. Sometimes they assume superhero status, while other times they represent evil and destruction. Here in the Southwestern deserts of the United States and Northwest Mexico, snakes live their duality in the midst of human intervention. And while most snakes are harmless, the rattlesnake does cause real concern in our communities.
Arizona claims 13 species of rattlesnakes, more than any other state. In the deserts, rattlesnakes are most active from March to October—but they are known to bask in the sun every month of the year. The most commonly seen snakes are the Western Diamond-backed, Mohave, Black-tailed, and Sidewinder. I personally have spotted a Western Diamond-backed and a Sidewinder on my property. Both were re-located by firefighters from Golder Ranch Fire District (GRFD). Adam Jarrold, acting chief with GRFD, reported responding to nearly 3,000 snake calls districtwide for 2021.
When I asked Anne-Marie Braswell, community relations manager for Golder Ranch Fire District, why snakes are attracted to our communities, she replied with a better question: “They were here first, so I suppose we should be asking ‘Why are we attracted to their community?’” She continued, saying to eliminate water from your yard. “Snakes are attracted to pools, fountains, bird baths, etc. Snakes are also attracted to rodents. Keep a tidy yard in order to minimize the risk of pack rats or other rodents using any piles of brush or debris as a den.”
“Snakes are attracted to areas that attract their prey,” says Robert Villa, a research associate and curator at the Desert Laboratory on Tumamoc Hill. Snakes feed on frogs, insects, rabbits, rats, packrats, mice, and other rodents. As gardeners, we can appreciate snakes for their appetites and also for their ability to facilitate secondary seed dispersal. When snakes consume rodents and other species, seeds are expelled into the larger environment. This supports the growth and survival of plant species. Some have even labeled snakes as ecosystem-engineers.
According to the Centers for Disease Control and Prevention, an estimated 7,000 to 8,000 people are bitten by venomous snakes in the United States each year, and about five of those people die. The number of deaths would be much higher if people did not seek medical care. If a venomous snake bites you, call 911 or your local emergency number immediately, especially if the bitten area changes color, begins to swell, or is painful.
If possible, take these steps while waiting for medical help:
• Move beyond the snake’s striking distance.
• Remain still and calm.
• Remove jewelry and tight clothing.
• Position yourself so that the bite is at or below the level of your heart.
• Clean the wound with soap and water.
• Don’t use a tourniquet or apply ice.
• Don’t cut the wound or attempt to remove the venom.
• Don’t drink caffeine or alcohol.
• Don’t try to capture the snake.
We all want to live in this complex environment. The more we know about wildlife with whom we share our space, the better we are able to appreciate the desert. As Villa suggests, “Be aware of your surroundings and think about the moral value of co-existing with wildlife.”
SaddleBrooke/SaddleBrooke Ranch Master Gardeners are volunteers trained under the auspices of the University of Arizona, Cooperative Extension, Pinal County. We offer educational programs and classes to residents of our communities.
Need advice or have questions about your own garden? Send an email to:
[email protected]—include your name, address, phone number, and photos of your issues.
Visit our website at extension.arizona.edu/saddlebrooke-master-gardeners.