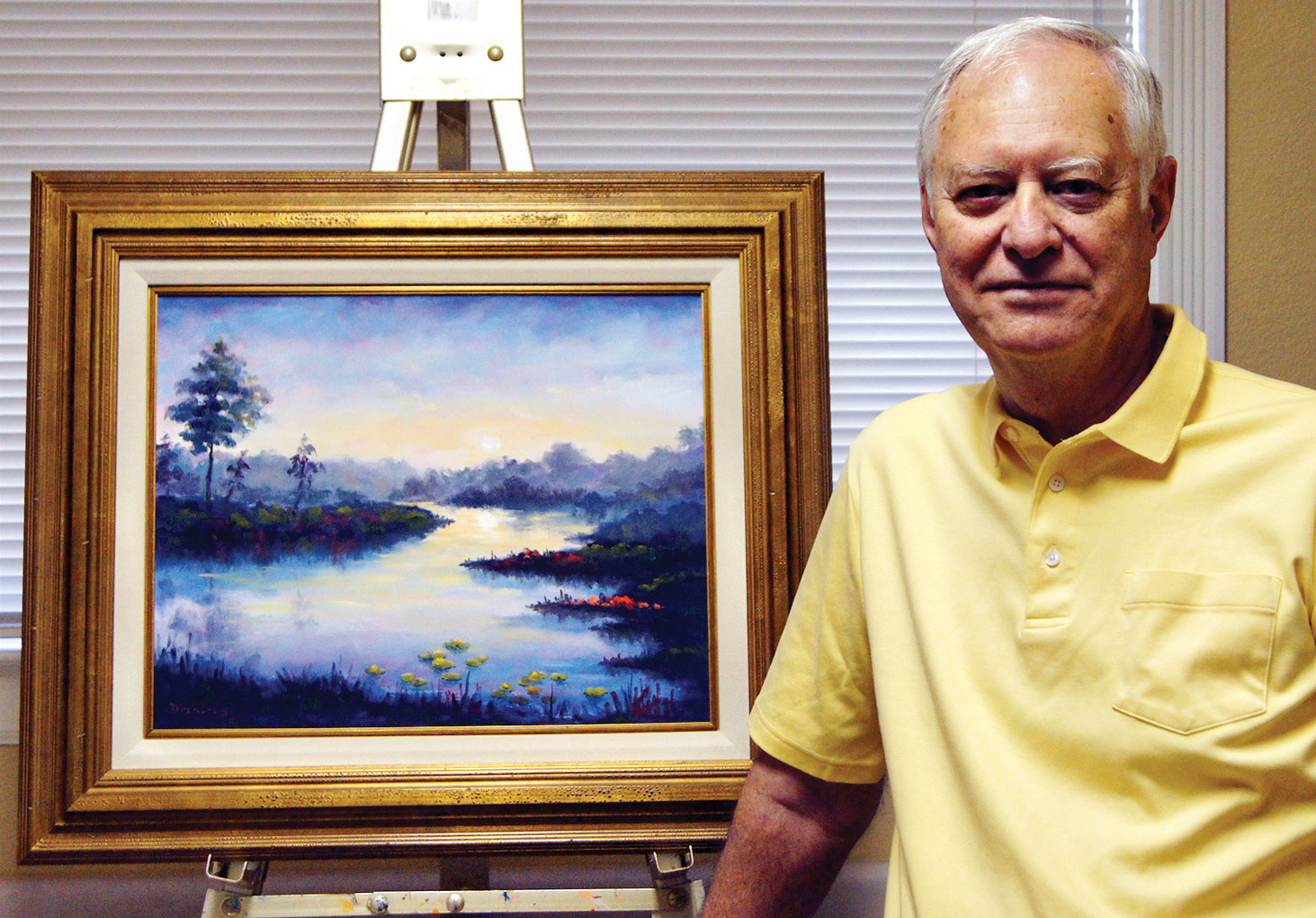 Mick Desmarais and his painting “Untitled.” Photo by J. Cohen

Sometimes you enter a home and are awestruck by its décor, detail and artwork. And you know the person who lives there not only has an eye for beauty, but also knows how to create it. Mick Desmarais is such a person. You can see it in the furniture he has built, the cabinetry he has embellished and the splendor of the paintings he has created.

Born and raised in Marinette, Wisconsin, Mick thrived alongside his father Cyril, mother Lois, sisters Marie and Nancy and brother Stephen. Mick recalls how he, along with his dog, Peppy, would rise early to fish the nearby Menominee River and then sell his catch before running off to school. As a youngster Mick loved to sketch. Self-taught, he drew landscapes, city scenes and illustrated his school’s publications; each he feels were valuable lessons in learning perspective.

In 1961 after high school graduation, Mick enlisted in the Air Force to see the world. Unhappily he was stationed at Wurtsmith Air Force Base, Michigan, three hundred miles from home. However, two years later Mick was happily transferred to Wakkanai U.S. Air Force Base at the northern tip of Japan where he monitored security communications and traveled throughout the country.

Once discharged and using the GI Bill, Mick earned a Liberal Arts degree from the University of Wisconsin–Oshkosh and later an accounting degree. It was at Wisconsin he met future wife Kathy. Over the years Mick, Kathy and daughter Kelly resided in cities around the Midwest. An upper-level manager for the Government, Mick worked in various positions. As retirement approached, he and Kathy explored relocation options. In 1998 they moved to SaddleBrooke. The time was right for Mick to discover the creative world he had enjoyed as a youth.

He took art classes offered by both Central Arizona College and, as a member, the SaddleBrooke Fine Arts Guild. He explored art books and articles and studied tutorials he found on the Internet. Currently Mick shares his expertise as moderator for the Guild’s Non-Critical Critique group that helps Guild artists improve their artwork.

He admits it is through his exploration and experimentation that he has become more cognizant of depicting light sources and values in his paintings. He is particularly inspired by the Impressionist style of light and its changing qualities. Furthermore, he is conscious of the impact people and animals radiate when placed in a scene. An avid student of oil paints, Mick finds he can usually mix any color he wants using a limited primary palette. And he has found a healthier alternative from traditional oil paints and harsh solvents by using water-soluble oil paints.

Mick’s landscapes, city life, still life and portraits are beautifully thought out and executed. He says he strives to create works of art that his viewers want to step inside and visit. His creations are just that, worlds to be visited time and time again.