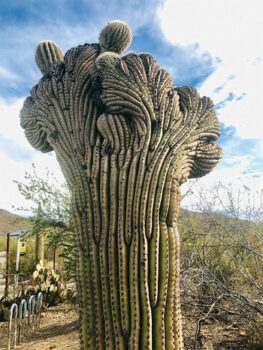 The Sonoran Desert is full of surprises—javelina families sharing a prickly pear cactus, hawks on the arms of saguaros, water rushing through arroyos after a rain, a chorus of coyotes howling at dusk, and cactus flowers coloring the desert in spring. But when you come upon a saguaro whose familiar posture, form, and balance has taken on abstract expressionism, you know that nature has dealt you an eyeful of magic.

The saguaro, Carnegia gigantea appears only in the Sonoran Desert—mostly in southern Arizona but also in northern Mexico and parts of California. According to Don Swann, a biologist with the National Park Service, “Cristate saguaros, or crested saguaros, form when the cells in the growing stem begin to divide outward, rather than in the circular pattern of a normal cactus. This mutation results in the growth of a large fan-shaped crest at the tip of the saguaro’s main stem.”

The first recorded sighting of a crested saguaro might have been a photograph of the species taken at the Arizona territory display during the 1893 World’s Fair in Chicago. The specimen wouldn’t have survived the Windy City’s winter, and anyone who witnessed it has been gone for decades. Still, the unusual saguaro continues to garner both wonder and delight when one appears as a curiosity in the Sonoran Desert.

Scientists have yet to agree on what causes a saguaro to crest and the reason for this anomaly is still in question. Many suggest it is caused by weather—frost or lightning strikes. But more recently, the odds have fallen on internal chaos—genetic mutations or hormone disturbance.

In a recent study, researchers at Arizona State University (A.S.U.) and University of Arizona (U. of A.) successfully sequenced the saguaro’s genome. “We can now identify the genetic regulatory and metabolic networks responsible for their unique form and physiology and their unique form of photosynthesis,” says Martin Wojciechowski, a professor with ASU’s School of Life Sciences.

Although the rare crested saguaro has puzzled scientists for decades, its scarcity makes it challenging to research. U. of A.’s Dario Copetti, who was part of the team that sequenced the saguaro’s genome explains, “If we tackled it [crested saguaro] from a genetic point of view, we would need to collect DNA from several crested saguaros and compare them to many noncrested saguaros—requiring substantial funding, labor, and research.”

A recent 2020 saguaro census at Saguaro National Park estimates around 2 million saguaros in the park, but only recorded one crested saguaro in the 22,000 that were mapped and measured. “There are many more than that known in the park, but the census is based on random plots”, says Swann. “It’s too small a number to draw inferences, except to say that it indicates they are pretty rare, indeed.”

Crested saguaros can be found in Tucson and the surrounding area. There are fine specimens at the entrance to the Arizona Sonoran Desert Museum as well as in the gardens of Tohono Chul and Catalina State Park. But the greatest pleasure comes from discovering one while hiking in the open desert, or watching one form in your own neighborhood.

SaddleBrooke/SaddleBrooke Ranch Master Gardeners are volunteers trained under the auspices of the University of Arizona, Cooperative Extension, Pinal County, and offer educational programs and classes to residents in our communities.

Need advice or have questions about your own garden? Send an email to:

[email protected]—include your name, address, phone number, and photos of your issues. Visit our website at extension.arizona.edu/saddlebrooke-master-gardeners for more information.