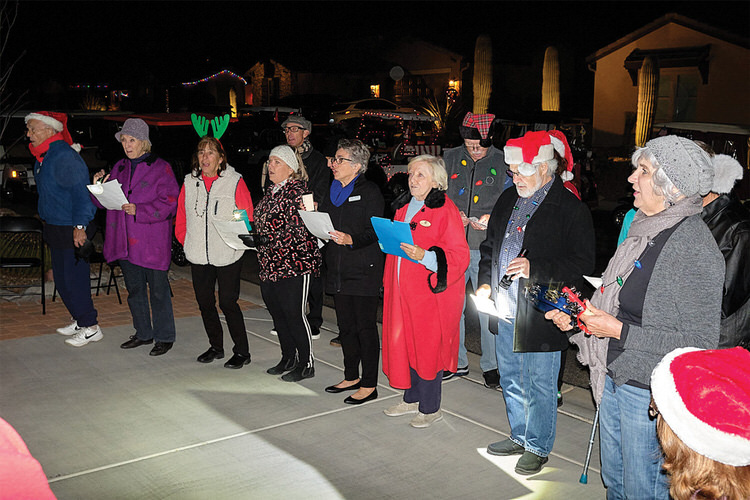 Singing at the Authurs in Unit 8A

For the 10th year in a row, the holiday spirit in song did not end in the ballroom, as 15+ singers met on Monday, Dec. 20, and Tuesday, Dec. 21, to drive their carts to the homes hosting their neighbors for holiday parties. As usual, on the first day we began at the Fire House, but on the second day we sang to the Wine Club in the ballroom!

We want to thank the following residents for opening up their garages/driveways:

Day 1: Lorraine and Bill Smith on Angora; Sue and Dave Marx on Canyon Vista; Debbie and Bob Ferguson on Arroyo Vista; Ellyn Biggs on Arroyo Vista; Zen and Rich Fera on Plover; Elizabeth and Lou Mastro on Cattle; Janelle and Bob Authur on Foxglove; Nancy and Ben Eisenstein on Heron; Cindy and Chris Pylkka on Heron; with the last stop being Judy and Jeff Smith on Pinyon.

Day 2: Donna and Charlie Scott on Gulch Pass; Jean Elaine and Chip Parfet on Arroyo Grande; Susan and Chuck Knight, together with Diane and John Murphy on Flat Rock; Toni and Lowell Graves on Dead Wood; Mollie and John Hunter on Obsidian; Maria Astaire on One Horse; Pam and Milan Steube on Hidalgo; with the last stop being Kim and Dann Denny on Flint.

Our singers really welcomed both the last stops where there was extended time to enjoy partying with the hosts. Jeff Smith wrote, “In our Unit, the evening began with an informal holiday celebration involving some 60 residents in our garage, which quickly spilled out onto the driveway and into the street. The sunshine-filled late afternoon and cool, crisp, and clear evening was not exactly Christmas-like weather that most participants have endured in their previous lives in other parts of the country and world.

However, the memories of those late December cold, snowy, and foggy days were quickly dispelled by the joyful enthusiasm of the residents as they joined in on the joyful sounds of the Christmas season. It was a terrific event and appropriate for the Christmas celebration.”

Twenty singers took part (15 the first day, 17 the second). Thank you to Margaret and Tom; Rebecca; Rita; Sandee and Larry; Jennifer and Steve; Jacque; Linda and Jim; Donna; Carol and Bill; Suzanne and Vince; Paula; Evelyn; and Helga. From the first “Deck the Halls” to the last “We Wish you a Merry Christmas” your enthusiasm was tremendous! Alastair has already begun confirming 2022 hosts, is working on expanding the routes even more, and hopes he can wave his baton again for that same outstanding group of singers.