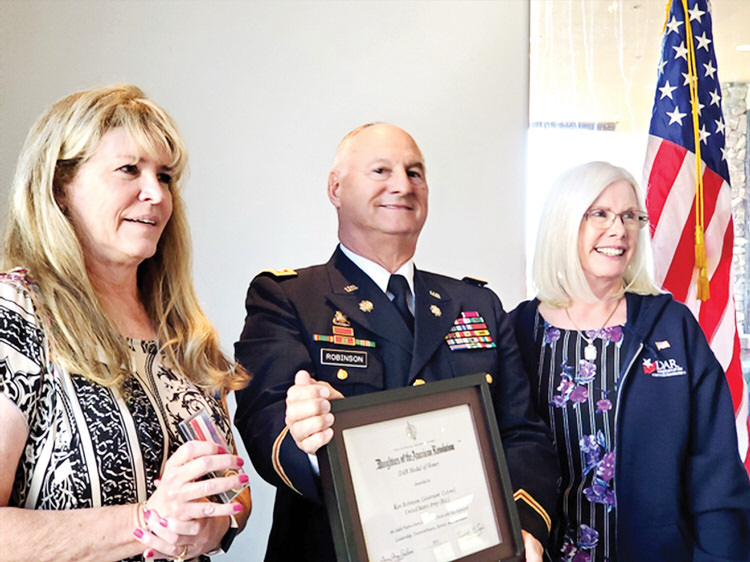 As an honorably retired military veteran (serving more than 34 years as enlisted and officer), Ken Robinson, Lieutenant Colonel, U.S. Army (Ret.), has earned numerous medals and accolades for his service, including the Legion of Merit medal as well as two Meritorious Service Medals, and he served in the Vietnam War and the Gulf War. Further, he has dedicated himself to giving back to military and veteran service organizations. In addition, Ken is the example of a great citizen because he also gives back to his community.

Rebecca Call, El Presidio Chapter chair of the Americanism Committee, shared that Ken is a true patriot. His dedication and devotion, selfless demeanor, and many years of post-military-career community service organizations and community civic groups, provide the credentials that make him a well-established and respected contributing member and supportive agent of any veteran and civic community service organizations he serves.

In recognition of outstanding service, leadership, and patriotism to his country, we were proud to present Ken Robinson, Lieutenant Colonel, United States Army (Ret.), with the National Society Daughters of the American Revolution (DAR) Medal of Honor on Nov. 11, 2021, by Chapter Regent, Holly Gibson of the El Presidio Chapter.

How are the DAR Medals of Honor awarded?

How many members are in Daughters of the American Revolution?

Founded back in 1890, the DAR has chapters all across the 50 states of the U.S. There are also various chapters in other countries, including Canada, Australia, Germany, Japan, and the United Kingdom, among many others. The organization now has more than 800,000 members all across the globe with varying nationalities.

Two Medal of Honor recipients are chosen by the DAR organization each year. The DAR Medal of Honor is the most prestigious award given. The recipient must have made unusual and lasting contributions to our American Heritage by truly giving of themselves to their community, state, country, and fellow man.

Who are the recipients of the Medal of Honor?