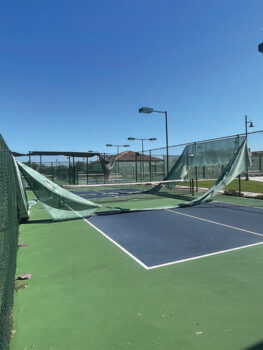 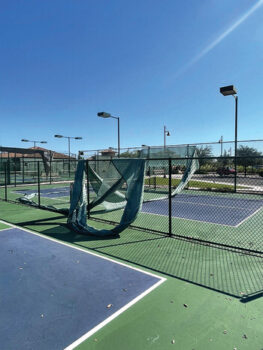 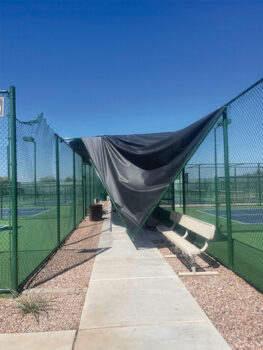 The pickleball courts were the target of a microburst that hit SaddleBrooke Ranch on Sept. 7 at 6:30 p.m. A number of players schedule Sunday night for regular play. The players got in one game and the rain began. Then the wind followed.

Most players ran for their carts and went home. Linda and Randy Wright, after leaving the courts, were blinded by the rain so they pulled over into the Bistro parking lot. Then the wind hit them like a blast. “The wind practically turned the cart over,” Linda said. “We had to lean over to one side to keep the cart on the ground. It was crazy!”

Some of the players in Sunday Chicks remained under the ramada to talk with friends, hoping the rain would quickly pass. They were wrong! Penny Oster looked up and saw a large wall of rain and dirt rushing her way. Penny fit herself in between the two drinking fountains. Three men that had also stayed to talk stood in front of her and the large ice machine, blocking some of the wind. “It was all of a sudden on us,” Penny said. “It felt like a hurricane or tornado coming in. Driving home near the end of the storm was also scary.”

Dav Armstrong, with some of his Sunday group, stood against the wall facing pickleball court three. “It was instant mayhem,” Dav said. “It was a hurrinado! Everyone under the ramada was drenched from head to tennies in a nanosecond. When the ceiling fan blades blew off and whistled past, I thought, ‘Get into the bathroom!’ I swear I saw my golf cart lift off the ground. I thought it was going to take the roof off the ramada. The sound was like a freight train.”

Mark Pohler was inside the storage room at the Ramada handing out balls and was safely out of the weather. His car parked outside did not fare as well, as the storm blew out his rear car window, leaving a wet mess inside the car and a lot of glass to clean up.

Sheila Davidson, a founder of Sunday Chicks, when seeing the storm, headed for the restrooms for shelter. “Things were flying everywhere on the courts and under the ramada,” Sheila said. “The wind burst came so quickly, so we were all caught off guard. The bathrooms were the only safe place to go.” She stayed safe but the enclosure of her golf cart was destroyed and the upper windshield was blown 30 feet into the pickleball courts.

Luckily, no one who remained at the pickleball courts during the storm was injured. Finally, when the rain and wind calmed down, they left, respecting the power of a storm! All of the pickleball courts were covered with debris. Fencing was bent and wind screens were ripped to pieces or torn off their brackets. The windsocks were also a shredded mess.

Mark, as vice president of SaddleBrooke Ranch Pickleball Association, notified the HOA of the court damage and let members know that the pickleball courts were closed until further notice. Many members offered to assist in the cleanup, however, for liability reasons, the HOA wanted their staff and contractors to manage the cleanup. No one wanted the courts closed for long. Andrea Marchus, with the HOA, knew it was a high priority to reopen the courts and she got the staff and contractors there to clean the courts and assess the damage. Due to their quick response, the courts were reopened Friday, Sept. 10, with the exception of five courts that sustained structural damage. Andrea and her team are working hard to get those damaged courts repaired quickly. The association is very appreciative of the quick response by Andrea and her staff and look forward to the last of the damage being repaired soon.