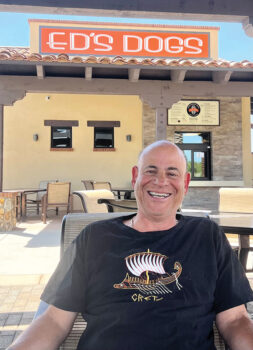 Larry Steinberg has been playing pickleball since 2016. Larry is a retired social worker psychotherapist from New York and got interested in pickleball immediately after he moved to SaddleBrooke Ranch. Larry plays three to four times a week, and after pickleball he makes Ed’s Dogs his first stop. Looking for a cold drink or a quick hot dog or burger, Ed’s Dogs has it all.