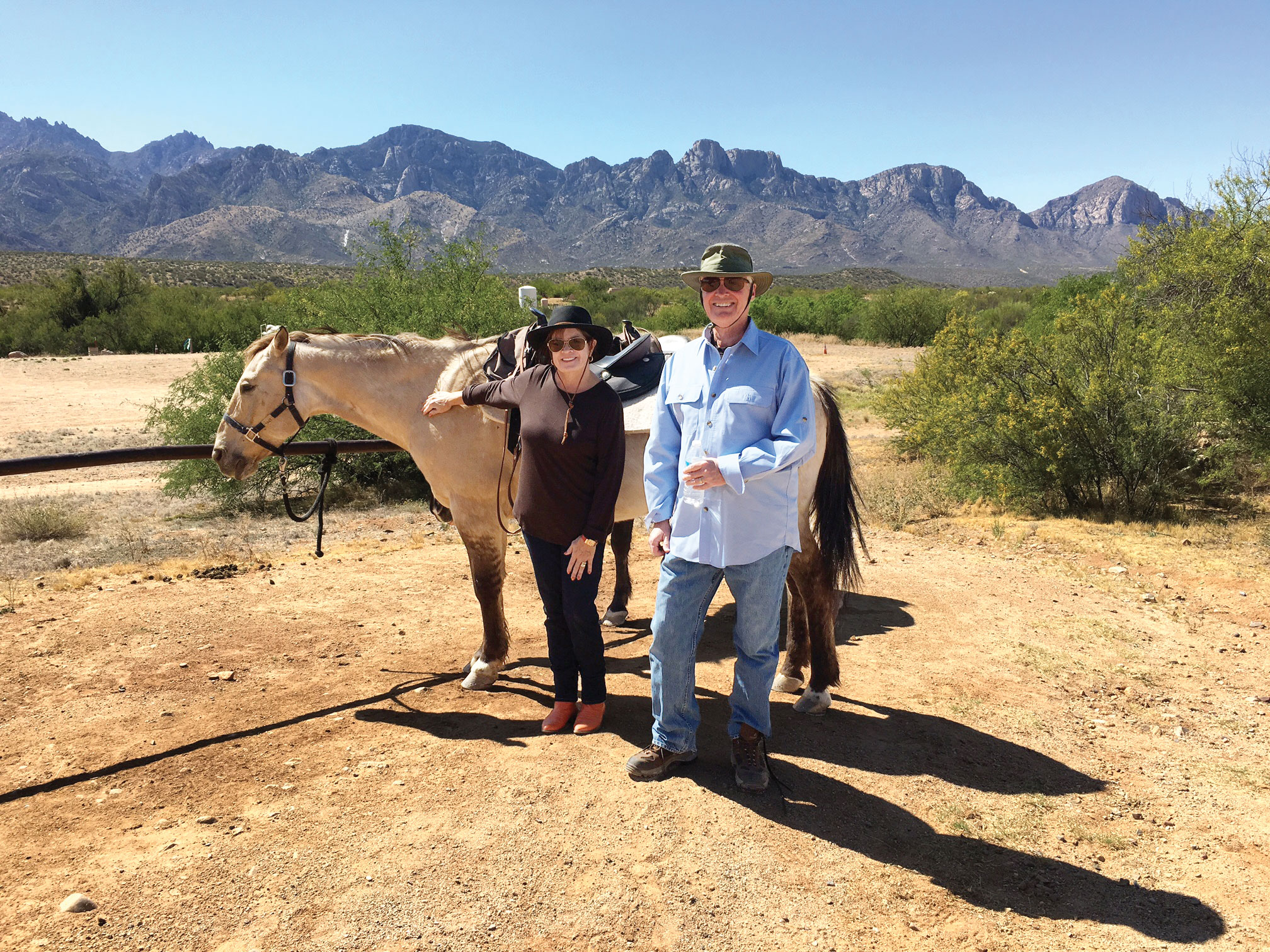 Some new riders joined in the fun with the SaddleBrooke Ranch Riding Group seeing the Catalina Foothills on horseback for the first time at one of the group’s frequent venues, Pusch Ridge Stables in Oro Valley. Janice Neal had only been on a horse decades ago while new resident Madoka Knight had never been horseback riding before.

Janice admitted to being nervous about falling off or not being able to control her horse. The stable owner reassured her as she introduced Janice to her mount, Hoss. Janice said, “Hoss was a wonderful horse, a good size for me and not frisky at all. The saddle was comfy and they adjusted the stirrups perfectly for me. My biggest struggle was in trying to prevent Hoss from munching on the foliage!” Janice enjoyed the new experience of seeing the desert flowers and cacti from this entirely new perspective. “It was a beautiful day and a new adventure for us.” Janice would like to do another ride in the future but says, “I am not ready for the difficult trails. I’ll be very content with an easy ride.”

New resident Madoka Knight said horseback riding was one of the things she most looked forward to trying upon moving to SaddleBrooke Ranch. It was something she wanted to do for many years but never had the opportunity. Madoka arrived at the stable early to have an opportunity to talk to the staff and see the horses. She said, “Standing next to the horses they all looked so big, and I wondered if I would ever be able to control them. However, the stable owner took time to explain the basics of riding to me and assured me that she would choose an especially calm horse for me to ride. Once mounted my initial concerns quickly disappeared, and I felt very comfortable. As we started off down the trail I realized how much better the view was from horseback than walking. I was able to look down at the many cactus plants along the trail and also look out over the tree tops to the foothills of the Catalina Mountains.” Madoka said she would like to do it again.

Both Janice and Madoka mentioned that while they thought their legs may be sore, they did not find they were stiff from the ride. Their husbands, Mike Neal and Karl Knight, also participated in the ride and enjoyed it.

Other new residents who joined the ride for the first time were Tom and Pegg Ridolfo. Pegg owned her own Thoroughbred in Indiana but decided it was best to find him a good home there. She was happy to find a group that shared her enthusiasm for horseback riding. It was also Carolee Bailey’s first time riding with the group. Her husband Paul Bailey used to own horses and has participated in several rides with the group.

The SaddleBrooke Ranch Riding Group does not have organized trail rides over the summer as the summer heat does not make a ride as enjoyable. The group starts its fall schedule in late September. If you are interested in receiving more information on the SaddleBrooke Ranch Riding Group, please contact the group secretary, residents Don and Rebecca Williams, at [email protected]