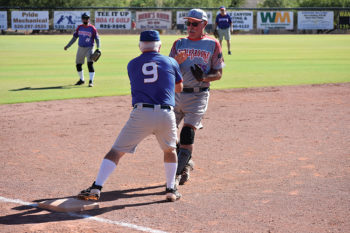 Dave Kraut tags out Tim Benjamin on a close play at third base in a recent Senior Softball Recreation League game at SaddleBrooke. The league is open to all Ranch residents.

“Next time open your eyes,” the first base coach says to the catcher who made a nice grab on a foul pop-up. “Thirty years ago, you would have had it,” an opponent says to the third baseman who couldn’t reach a fly ball in time.

The Recreation League, one of five in the community’s softball program open to SaddleBrooke Ranch residents, is considered the “entry-level” league. The players might not be the fastest or the best hitters or fielders but they sure seem to have fun and love competing.

Commissioner, player, and Ranch resident Mary Schneck says the league appeals to those who just want to enjoy playing the game. She acknowledges that the skill level is a bit lower than the other four leagues, as some players have never played before and others are coming back after years of being away from the game.

What she likes best about the league is the nonstop encouragement from teammates and even opponents. Players cheer good plays on either side, she says. “Winning and losing is not as important as just being able to participate,” she adds.

The atmosphere at the games is friendly and relaxed. The Ranch’s Jef Farland describes it as “family-like.” He loves the joking between teammates and opponents.

“Great pitch,” says one hitter to the pitcher after the ball landed on the outside part of the plate for a strike. “Did he just throw a curveball?” asks another on a pitch that did seem to bend thanks to the strong winds that day.

Absolutely Art beat Window Wizards 18-8 in the game that included some fine fielding and hitting.

Diane Dial, who had four hits in her team’s win says the players can all laugh at each other’s blunders as everyone tries their best. “We don’t feel intimidated by each other on the field,” she says. “We’re just having fun and hopefully winning a game while we’re at it.”

Dennis Purcell, a left-handed third baseman for Window Wizards, made some nice plays in the field and had three hits in the game. He never played softball before moving to SaddleBrooke five years ago. The last time he was on a ball field was in Little League.

He says the league is a great place to start if you have little or no experience. Like the other players, he says the league is much more relaxed with less emphasis on winning. He notes that players quickly understand that everyone makes mistakes and you learn not to take it too seriously. “The focus of the league is about having fun and being supportive,” he says.

Manager of the winning team, Steven Pede, agrees. He says “folks want to win but it is not a matter of life and death. It’s about having a good time and everyone making an effort. It’s always more fun to win than lose,” he says, but it won’t ruin his day if his team loses.

The Recreation League plays Monday at 7:30 a.m. at SaddleBrooke’s jewel of a ballpark if you’d like to watch the games or see if you’d be interested in playing when the fall season starts in early October. Seven weeks remain in the league’s summer season.

Go to saddlebrookesoftball.com to learn more about playing, volunteering, or watching the games in all five leagues.