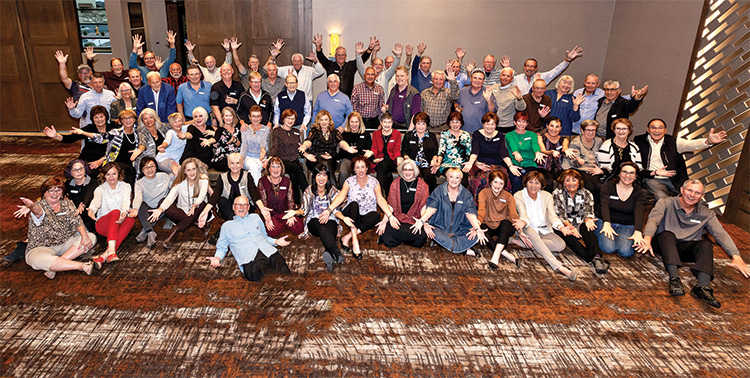 Residents of Unit 8A celebrate streak of 48 months of happy hours, with an Evening Under the Desert Stars dinner party (and a slide show) in the Sol Ballroom at the Ranch House Grill & Brewery; Photo by Steve Weiss.

Sixty-nine Unit 8A-er’s celebrated 48 months-in-a-row of unit happy hours with an Evening Under the Desert Stars dinner party on Friday, Feb. 21, in the Sol Ballroom.

The happy hour gatherings started at The Bistro in March 2016, as Unit 8A residents began to move into their new homes. The first evening was a resounding success, and the streak began. Monthly happy hours became not only a Unit 8A tradition, but also a way to welcome new neighbors as they moved into the neighborhood. As attendance grew, happy hour moved from The Bistro to the La Vista Room, to the Ranch House Grill & Brewery, and finally to the Sol Ballroom, for the three and four-year milestone celebrations.

The highlight of the evening, however, was the announcement of the winner of the Unit 8A Logo Contest, and the unveiling of the new unit logo. Seven Unit 8A residents submitted logo designs anonymously, and residents voted on their favorites at the January 2020, happy hour. The logos were again displayed at Evening Under the Desert Stars and the creators of each, CJ Utecht, Marci Whitehead, Marty Knezovich, Denise Doepke, Marvin Soskil, Sheila Davidson, and Dick Ryan, were recognized and thanked for their entries.

The winning logo, created by Sheila Davidson, captures “The Best of Times” with a desert cactus against a colorful background and overlaid with “Unit 8A”. The Logo Contest Committee recognized Sheila with many kudos, and a Certificate of Award for the winning logo. She also received a certificate for an item with the new logo, which she promptly gave to Unit 8A resident Dick Ryan, who assisted participants with logo design. Dick was also thanked by the Logo Contest Committee with a Certificate of Appreciation for his time, talent, personal resources, and creativity in assisting participants.

The evening’s theme was reflected in table centerpieces of starry lights atop desert sand.