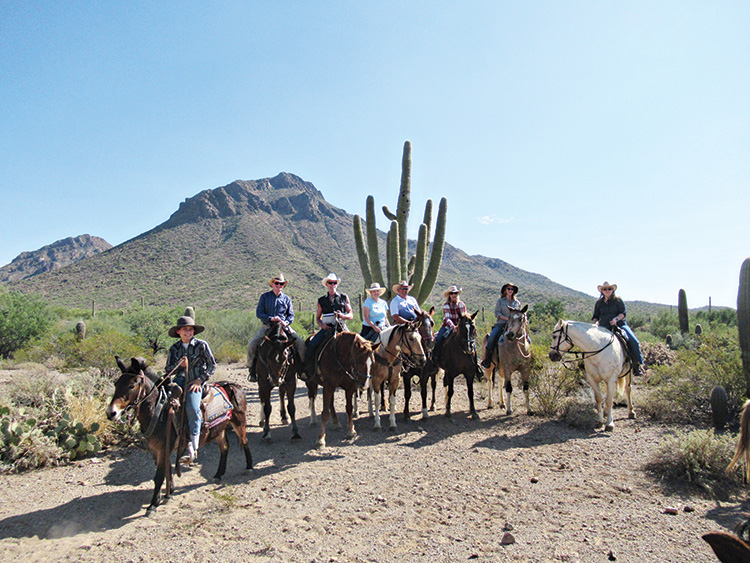 The Horseback Riding Group enjoyed riding in parts of the Saguaro National Park and areas adjacent at Old Tucson Park. The ride took them through desert brush and cacti and included beautiful views of the mountains including Golden Spur, a mountain popular as a backdrop in the many movies shot at Old Tucson. There were picturesque views of distant mountains to the south and west.

After the ride. about half the group of 15 riders enjoyed a discounted entrance to Old Tucson where re-enactors talk about many aspects of the Old West such as what it took to run a saloon, how the game of Faro—referenced in many Western movies—was played, what an old time medicine show entailed, and what a shopkeeper might have in stock in Tucson of the 1870s. A narrated tour of the park was offered on a small train that circles the park, and there were several stunt shows and gun fights for the amusement of the crowd.

The group also rode at the Westward Look stable in mid-December. This stable is just off Oracle on Ina at the Westward Look resort. It offers a surprisingly nice ride along the foothills of the Catalina mountains. The group chose this convenient location so that they could tend to the inevitable holiday errands after the ride.

The group plans a ride on Feb. 1, at Donnelly’s D-Spur Stable in Gold Canyon near Apache Junction. This location works well in the early spring as it is just a bit warmer closer to the Phoenix area, and sometimes flowers are already peeping out.

Those interested in the group’s activities can visit the “Things to do – “Clubs” section on the SaddleBrooke Ranch HOA website. There is a link in the middle column for “Horseback Riding Group.” From there, you’ll see contact information for the secretary, Rebecca Williams under the information. You will then see a webpage about the group’s activities along with the “Read News” section for upcoming rides.

If you would like to participate, simply click on the link at the bottom left under “Contact Us.” Give your name, the ride you want to join, and the time if there is a choice. The secretary will get back to you with a confirmation and can help with any questions you may have. You can participate as often as you chose. All rides are one hour and at a walk so as to enjoy the scenery.