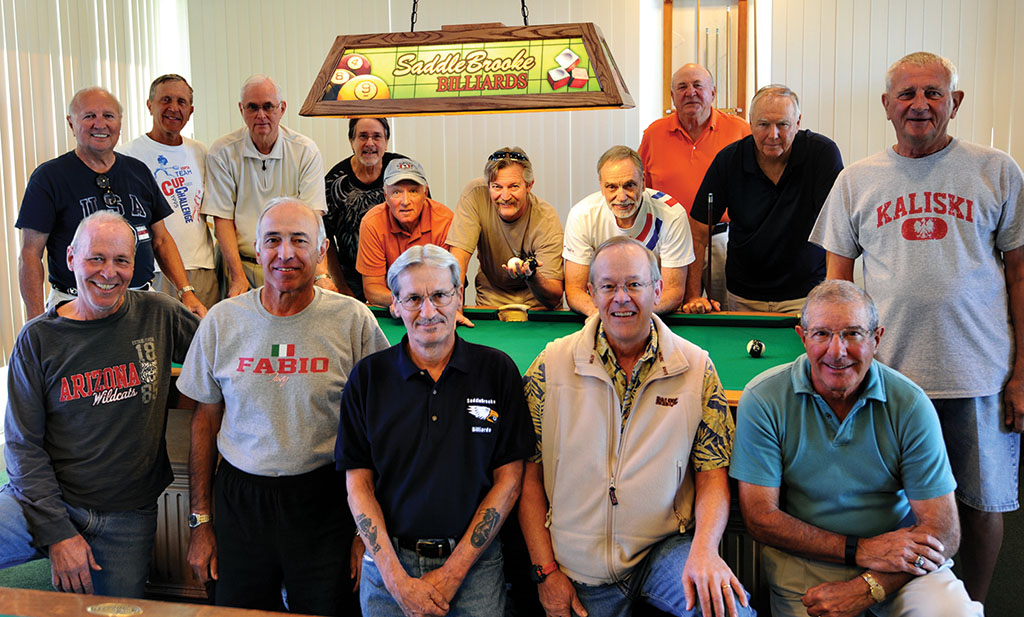 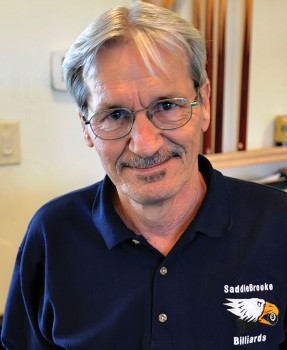 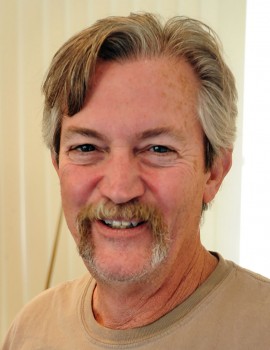 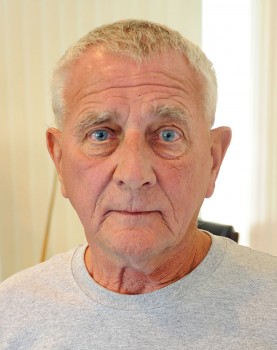 On November 14, 2015 the SaddleBrooke Hot Dog Blind Draw Partners 8-Ball Tournament was held in the SaddleBrooke Starter Shack. The tournament directors were Dominic Borland and Joe Giammarino. After a blind draw the 15 players were grouped as follows: Jim “Aviator” Wydick and Barry Lyon, Dave Brinker and Ron “Q” Quarantino, Jim “Shooter” Fabio and Fred “The Baker” Dianda, Gary Rowell and Richard “Loose Rack” Galant (Ranch), Richard “Villa Park” Werkmeister and Vance MacLeod, Dan Stebbins and Tom “Half Jacket” Barrett, and finally because we had an odd number of players, Dominic “The Doctor” Borland/Joe “Fast Eddie” Giammarino would be a single partner and rotate games, with Tom “Ski” Kaliski as the other partner who would play all games. We ended up with seven teams competing.

Thank you Vivian, at HOA One, and Vance MacLeod at Temperature Control, Inc. for your generous gift certificates. Thank you to all participants and especially Fred Dianda and Tom Barrett for the delicious pastries. The tourney was a two out of three double elimination. Play commenced on two tables at 1:00 p.m.

Recap: Tom Kaliski and Dominic Borland/Joe Giammarino’s road to the Championship started by defeating Richard Werkmeister and Vance MacLeod 2-0; next up was the formidable team of Jim Fabio and Fred Dianda who were also beaten by Tom’s team 2-0. The finals of the winner’s bracket came down to Tom Kaliski’s team against Gary Rowell and Richard Galant, Tom’s team sent Gary and Richard to the loser bracket by a score of 2-1. Gary and Richard went on to defeat Jim Fabio and Fred Dianda in the losers bracket final to set up the finals against Tom’s team. The finals started fast with Dominic’s flawless break and runout. Congrats, Dominic, on the tournament’s only Break and Run! Tom and Joe finished off the next game for a 2-0 win and the top spot in the tourney.

Side note: On the last shot of the tournament Joe had to kick an obstructed 8-Ball the length of the table, Jim Fabio joked that he would bet his car on the shot. Joe did not accept or refuse the wager but proceeded to sink the 8-Ball for the win! Jim still has his vehicle.

A fun day was over after three hours and approximately 36 games of 8-Ball, not to mention the many hot dogs, a few pounds of potato salad, beans and delightful pastries the 15 players consumed. That is a good day! Want to be part of this billiard community? Contact Joe Giammarino [email protected] or Dominic Borland [email protected]