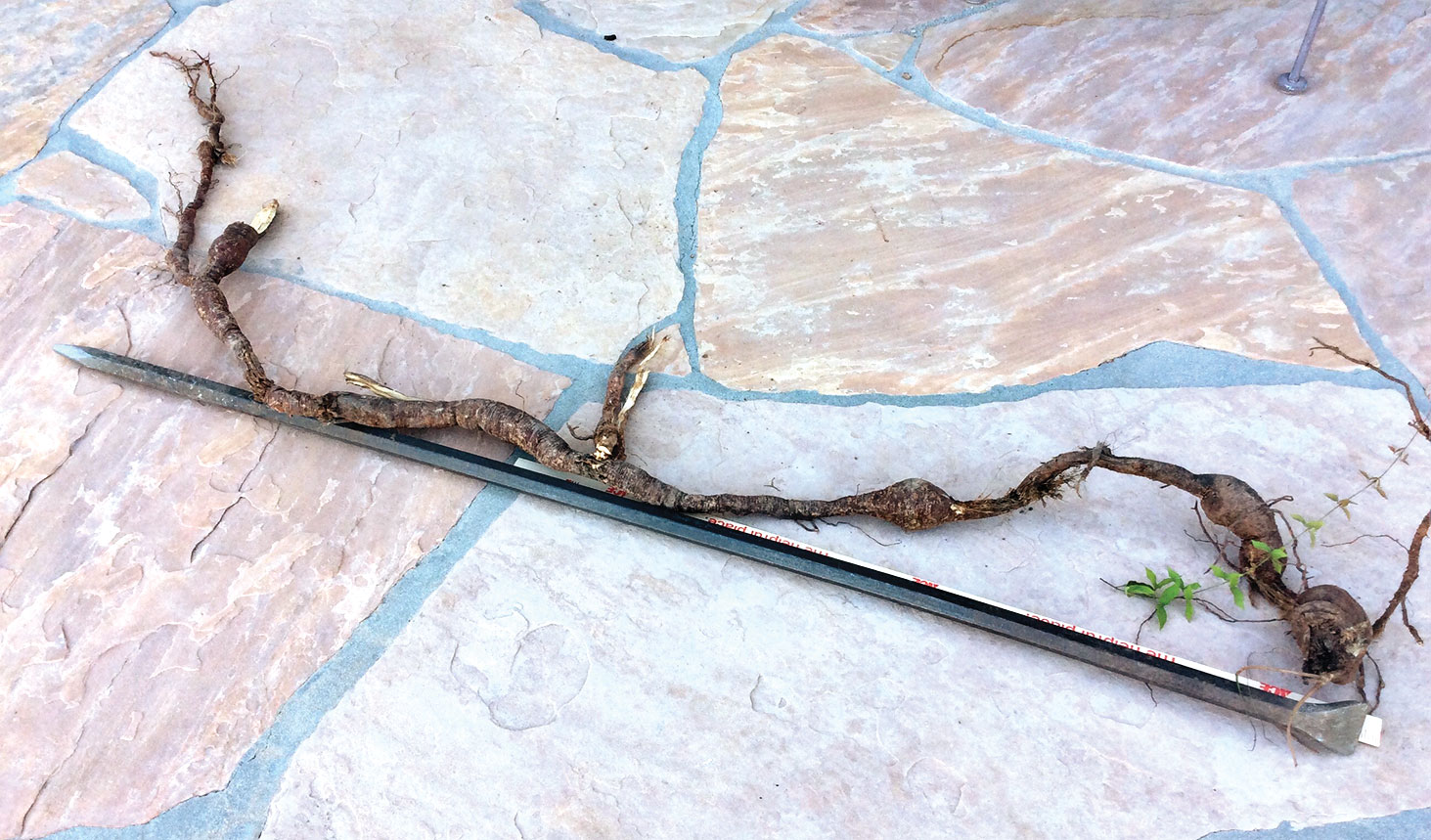 My five-foot digging pole next to the first catclaw I dug up.

I hate catclaw vines! I know “hate” is a strong word, especially towards a plant. But I do hate catclaw and let me count the ways. For those of you unfamiliar with this plant, catclaw [Macfadyena unguis-cati] is a perennial woody vine that blooms in the spring with gorgeous yellow trumpet-shaped flowers. Well, that’s all the good things I have to say about catclaw which, by the way, can be found in many of your neighbors’ backyards.

If you are lucky enough not to own one of these, don’t! Let me begin by warning you that catclaw is invasive. I planted catclaw to cover a block wall and, over time, new catclaw vines began to appear everywhere. Pulling them out accomplishes nothing. They don’t seem to care. The more I pulled, the more they grew. I assumed that seeds were spreading from the ugly foot-long brown pods that grew from each fertilized flower. I tried removing the pods before they ripened, but apparently, I missed some.

Catclaw vine will not stay in your yard. Overnight, it will climb over the fence or block wall and end up in your neighbor’s yard. Oy! It is also a very sneaky plant. It grows unnoticeably along the gravel until it finds your house and then, poof! Your house is covered by catclaw vines. It has a million little tendrils shaped like…you guessed it…a cat’s claw which stick to everything, even your clothes and skin while you are attacking it with a machete. OMG!

I have been trying to get rid of the catclaw I planted for more years than I can remember. And this year, I hired some help to take care of the problem and remove it from my fence. The yard looked so neat, the fence freshly painted shone in the sunlight and the catclaw was gone. Then, one day as I strolled around my estate to check things out, I found more than a dozen little catclaw vines peeking out of my fence once again. This time, I was determined to get the little buggers by their roots and armed myself with shovel, trowel, weed digger, you name it. Imagine my surprise when I discovered a tuber of sorts underneath the soil attached to the sprouting vine. Aha! Now I’ve got you, I thought. Wrong! There was a root under the tuber which led to another bulging tuber, and then on to another root and on and on until I had dug up half my yard.

Two weeks later, having the strength to dig up only one catclaw every few days, I can claim victory! My biggest garden nightmare is gone!

Your Master Gardeners invite you to visit their website: http://saddlebrookemastergardeners.org/ for all up-to-date information and events for your community. Garden questions? You can reach our very own Garden Helpline by calling Pat at 407-6459.

Remember, nothing brings more tranquility to the heart than a beautiful garden.