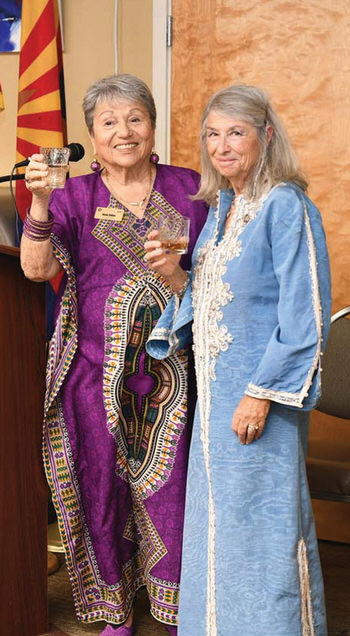 Joan and Marilyn at the Purim celebration

The IJSS March 25 service was held in person, including a dinner beforehand. After services, there was an Oneg Shabbat, sponsored by Sharon and Art Triester celebrating their recent anniversary and Seth and Roz Eisner supporting IJSS.

Rabbi Harari conducted a class “The Masks We Wear!” Our discussion was vibrant as we spoke about being Jews in a secular world. Do we keep our Jewish identity at bay as we meet, socialize, speak, interview, or discuss among those who are not? We spoke of Queen Esther and her masking her Judaism until she was put to the test to tell her husband, a powerful king, of her faith in order to save her people. To show who you truly are is sometimes an act of faith.

The Purim celebration with the Institute for Judaic Services and Studies (IJSS) and Jewish Friendship Group (JFG) was an evening full of friends being with friends, laughter, and happiness. Attendance was fabulous and there were so many people in costume. Hamantaschen in a variety of flavors shipped in from Brooklyn was served. There were also delicious desserts contributed from our members. There was no shortage of beverages with an extra punch. This is a holiday of delight, laughter, and fun. We look forward to sharing holidays between IJSS and JFG in the future.

Passover was celebrated April 15-23. Many of our members enjoyed retelling the story of Moses and the Jewish people at Seders throughout the community. A staple food eaten throughout the holiday is Matzah, unleavened bread. Dnipro, Ukraine supplies much of the world’s matzah. The matzah produced is called ‘shmurah matzah.’ The matzah is handmade and preferred by many Orthodox Jews. The bakery exports over 70 tons of the matzah every year. Who would have known?

Running marathons is hard enough, but combating heavy rain makes it even more of a challenge. Just ask Valentina Versca Kiliarska, a 32-year-old mother from Ukraine who tackled and won the Jerusalem Marathon on March 25. Her words were simple ‘I just needed the world to hear my voice.’ She and her daughter (11 years old) escaped their home in Mykolaiv, Ukraine, when the Russians began to invade Ukraine. Her husband is part of the war effort. Her home has been destroyed. She is concerned about her parents and siblings still in Ukraine, sheltering underground. When asked her greatest wish, her response was ‘Peace for my country.’

Happy Spring to everyone.