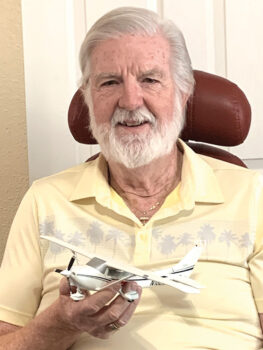 The Institute for Learning in Retirement (ILR) is proud to introduce Chuck Stump as an instructor in the ILR program. Chuck has had aviation as a vocation and avocation for over 35 years. Chuck’s interest in flying started at the age of nine when he experienced his first flight in a DC-3 from Scottsbluff, Neb., to Denver, Colo. Chuck was born in Denver and grew up in the Scottsbluff and Denver areas. He attended college at Colorado State University in Fort Collins, Colo., where he graduated with a B.S. in Social Science in 1970. After spending four years as a military police officer in Fort Leavenworth, Kan., and Schofield Barracks, Hawaii, he returned to school and attended the University of Northern Colorado in Greeley, where he earned a Master’s degree in psychotherapy and counseling. As a psychotherapist, he practiced in a number of hospitals and clinics in Colorado, Kansas, and Nebraska, as a drug and alcohol counselor and therapist in private practice. While in Wichita, he worked with a physician who was also a flight instructor, where he got his flying license in 1986, and the rest is history.

In 1995, Chuck got a job with Cessna Aircraft Company (Wichita) in Human Resources that helped make his “dream come true.” He worked for Cessna for 15 years and gained exposure and flight experience in  the many types of planes Cessna manufactured. Chuck has flying experience in the Cessna models 150, 152, 162, 172, 172rg, 182, 182 turbo, and the 206. He also has experience in the Beechcraft Sundowner and the Piper Warrior. His interest in aviation history was greatly expanded when he worked for three years on the restoration of Cessna’s first production aircraft, a 1927 model AW.

Chuck has taught college level courses in psychology, leadership development, conflict management, team building, communication skills, human sexuality, ethics, and critical thinking. For the ILR he has previously taught Psychology of Personality, Flying 101, and A Brief History of Aviation 3500 B.C. to 2018, and in his spare time he is a docent at the Pima Air and Space Museum. Chuck and his wife, Cheryl, moved to SaddleBrooke in 2015, where they both enjoy all of the amenities that SaddleBrooke has to offer. We are pleased that Chuck is an ILR instructor and look forward to his continued participation with the ILR. For more information about the ILR, go to www.sbilr.org.