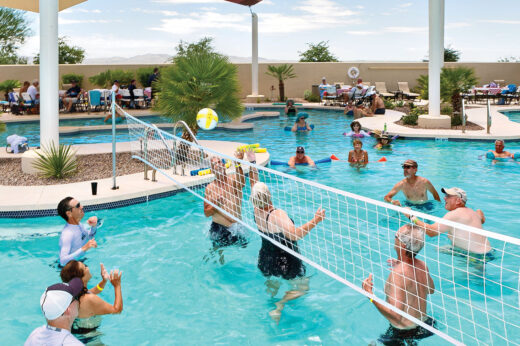 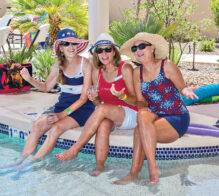 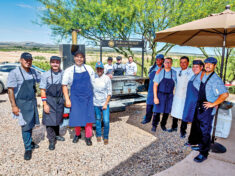 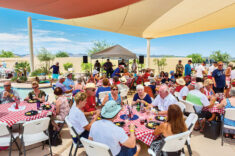 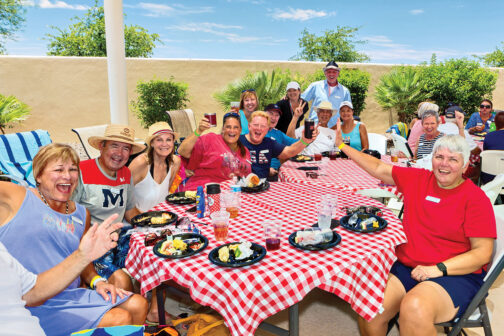 The staff from the new SaddleBrooke Ranch Clubhouse created an exciting Independence Day 2018 celebration at the Bistro Viente. The party, planned with team collaboration from Jose Salas, executive chef; Stevie Johnson, food and beverage assistant manager; Stephen Derrick, food and beverage manager and Heather Stanford, event planner, was a pool and patio themed outdoor extravaganza. Chef Jose’s vision was to provide a “friendly spread to maximize our residents’ time outdoors this 4th of July.” This event may have been one of the last large events before we break out of the Bistro and into the Ranch House Grill.

There were beverages, food and activities that appealed to everyone from our diverse community. Although Bloody Mary drinks were being served, four local craft beers were offered as the special drink of the day. The new brew master for the SaddleBrooke Ranch microbrewery, Joshua Johnson, was personally serving the beer. Chef Jose chose to serve not only the standard hot dog and hamburger but also smoked and grilled barbeque chicken made with his special BBQ sauce. A variety of salads were available as well as grilled vegetables and sweet corn boiled in beer. For dessert an old-fashioned ice cream sundae bar was set up and “popsicles” were served to all the tables. Music was provided by Eric Schaffer and the Other Troublemakers. Their music included country, blues and some ’70s folk rock. Some of the music were original pieces.

After the meal was digested guests were able to cool off outside by lounging in the pool and others were inside in air-conditioned comfort. The featured activity was a surprise mob flash dance performed by the staff. The surprise was not only on the guests as an unexpected treat but also on the staff since they were surprised to find many of the “senior” residents joining the dance. Over 280 guests celebrated together at our Bistro facility. Next year at the new larger Ranch Grill could we expect 500? Or could the success of this pool party be a reason to return to the pool area for next year’s Independence Day extravaganza? Stay tuned.