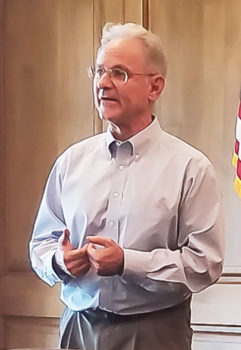 Nearly 50 residents in attendance were excited to hear about the expansion, development, revitalization and growth of Tucson. We learned that Tucson is the 33rd largest city in the United States. There are currently four large hotels under renovation in the downtown area with the hopes to bring more conventions to the great city. While we didn’t get to hear him speak about it, the mayor is a huge advocate of a wide range of successful teen mentoring programs.

A poll of the audience showed that we are all “transplants,” meaning that we are all born outside of Arizona. However, we benefit and utilize the services, festivals, theater and value that we have a culturally rich metropolitan area so close by.

The SaddleBrooke Ranch Democratic Club meets at the Hacienda Club on the fourth Monday of the month at 4:30. For information contact  [email protected]