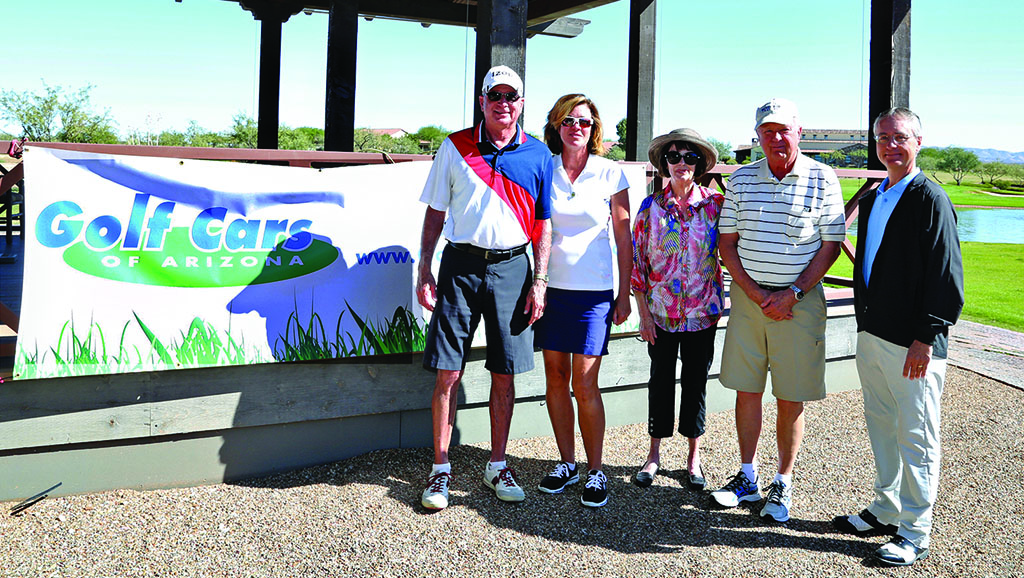 On November 8 the annual Couples Golf Event and Dinner was held on a beautiful Arizona autumn day at the Ranch. We had 56 residents and guests participating in a modified Scramble game with a total of 14 four-person teams (two couples making up a team) competing in two flights. The format allowed a game in which every member of the team was able to contribute to the team score on each and every hole. The Scramble format has every member of each team teeing off on each hole and then the team chooses the best drive. From the point of the chosen drive, three members of the team hit the second shot; the person who hit the prior shot is not allowed to hit the next shot. Play continues in this manner until the ball is on the putting surface, and at that point every player putts until the ball is holed. In addition each player on the team is required to have at least three of their drives chosen during the round. This presents the team with a need to strategize whose shot will be used and not just always choose the longest drive.

The golf tournament was immediately followed by a happy hour and delicious barbeque dinner at the Cadillac Chaparral. We had 67 attendees for dinner, a big increase over last year. After a buffet dinner of BBQ pork and BBQ chicken, beans, coleslaw, potato salad and rolls and butter the awards for the golf prizes were presented to the winners by Mike Jahaske and Ken Steinke. There were prizes for first, second and third place for each of the two flights as well as prizes for closest to the pin for men, closest to the pin for women, longest putt for men and longest putt for women. In addition one of our major sponsors, Golf Cars of Arizona, furnished a brand new golf cart on display as an incentive for making a hole-in-one to take the cart home. Not surprisingly no one made an ace on number 2, but the level of excitement was apparent as each player teed it up for their chance of winning a new, shiny, yellow golf cart.

After a full afternoon of golf and sunshine and a delicious cowboy dinner, a tired and well-fed group of happy golfers headed home knowing there would be another chance on another day to try to win that new golf cart.