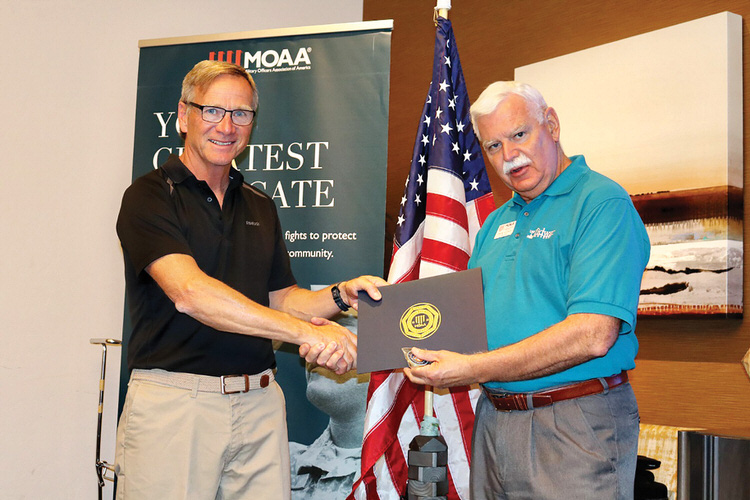 The Catalina Mountain Satellite Chapter (CMSC) of the Military Officers Association of America (MOAA) held its most recent meeting on Saturday, April 16, at SaddleBrooke Ranch. The meeting began with a business session presided over by Capt. Chuck Vaughan, president, during which members were updated on the chapter’s current activities.

LTC Dawson gave both an interesting and very relevant presentation on unmanned aerial systems, which was the subject of the courses he developed from 2014 through 2019 for Alpena (Ml) Community College.

He discussed the history of unmanned aerial devices in the U.S. military, as well as the current civilian development of drones over the last several years.

LTC Dawson explained that modern drones are primarily flown by an onboard autopilot aided by the Global Positioning System (GPS). The drone pilot can make minor modifications to the drone’s flight path while it flies from one preprogrammed waypoint to the next.

The next, regular CMSC meeting was held on May 21. Our presenter was Crystle Nehrmeyer, Superintendent of the Oracle Elementary School District. This was the last meeting before the chapter’s summer hiatus. Meetings will resume on Saturday, Oct. 15.

Potential members interested in joining our organization and attending meetings can contact Membership Chair LTJG David Bull by email at [email protected] or by phone at 520-825-0604.

CMSC is part of Tucson Chapter of MOAA, and encompasses Northwest Tucson including Catalina, Oracle, parts of Oro Valley and Marana, SaddleBrooke, SaddleBrooke Ranch, and Sun City. For additional information, visit our website at www.tucsonmoaa.org.

MOAA is a nonprofit veteran’s association dedicated to maintaining a strong national defense and preserving the earned entitlements of members of the uniformed services, their families, and survivors.