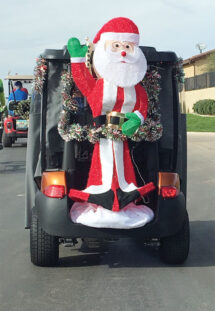 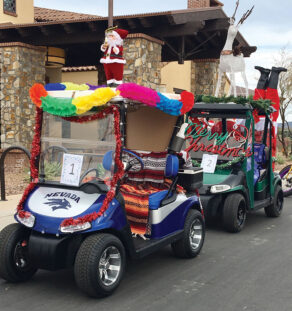 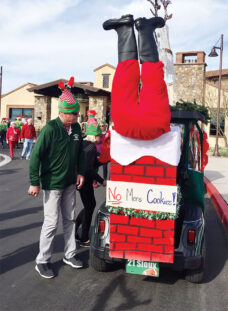 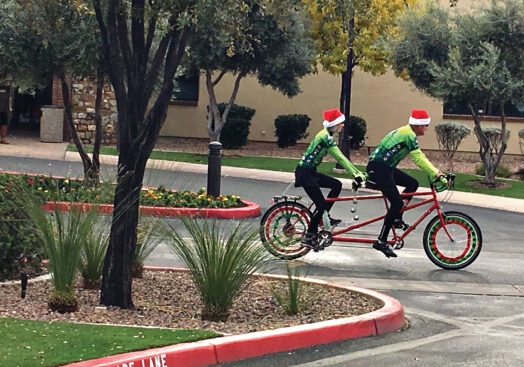 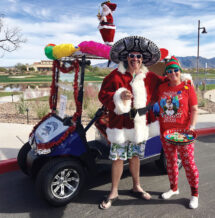 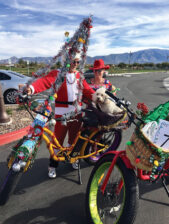 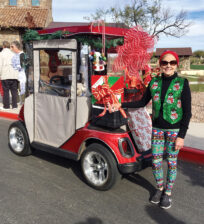 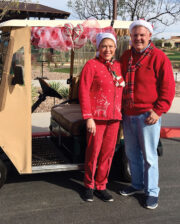 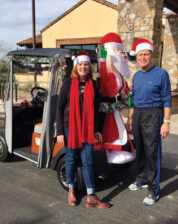 The weekend fanfare began on Friday, December 14 with the SaddleBrooke Ranch Holiday Parade leaving the new Ranch House with eight electric carts and two bicycle entries decorated for the holidays. At 2:00 p.m., the procession left the Ranch House and went around most of the neighborhood streets at the Ranch.

As always, we had many clever carts decorated for the holidays. This year, it was tough to compete against Santa Margarita with Tequila Jell-O shots but the competition was tough when we found Santa stuck upside down in a chimney due to way too many holiday cookies made by our talented bakers in the neighborhood. The reindeer had to jump on the top of the cart because Santa weighed so much this year and needed cart power to make it around all the streets. Our two bicyclists, with their canine companion were not working the pedals too hard in their electric bicycles but still hurried to get close to Santa in the chimney to hand him the Christmas letters found in their mailbox on the front fender.

Our parade was led by Bridget Hoey and Brittney from the HOA staff. Ballots were handed out by Stevie Johnson from the HOA staff and Linda Shannon-Hills bringing up the rear of our parade. We toured several streets around the neighborhood for 90 minutes, meeting many groups of neighbors watching from their driveways and cheering everyone on. Once the parade returned to the Ranch House, residents voted on the top three Holiday Parade participants.

The winners of the 2018 Holiday Parade were presented their awards during the break at Christmas and Hanukah Holiday Singing.

* 1st place: Monica and Ron Gustafson (Santa in the Chimney), presented with a $50 Bistro Gift Card and a bottle of wine.

* 2nd place: Dennis and Char Eckmeyer (Santa Margarita with Jell-O shots), presented with a $30 Bistro Gift Card and a bottle of wine.

* 3rd place: Kelly and “Wingman” Reuter with River (two electric bicycles), presented with a $20 Bistro Gift Card and a bottle of wine.

We want to thank all the participants that took the time to decorate their carts: Char and Dennis Eckmeyer; Monica and Ron Gustafson; Craig and Sandy Jans; Lynne and Phil Wescott; Bob Lamar and Susan Hastings; Gary and Jeanne Sherman; Tom and Kelly Reuter; Jim and Sue Hynes; Ed and Kathy Harris and Jeff and Judy Smith.

We want to thank the HOA for their help with the parade and Linda Shannon-Hills for organizing.