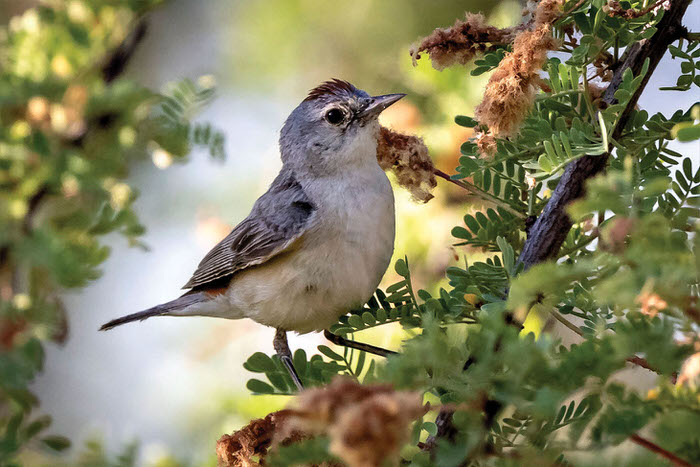 April is the month when migrant land birds begin appearing in profusion. It is when the specialty warblers appear in numbers at all elevations and when Elf Owls and Western Screech-Owls are active at our lower elevations. Flammulated and Whiskered Screech-Owls are in higher elevation in the pine and oak forest. This is also the month when hummingbirds start crowding our feeders. As a reminder, remember to clean your feeder and change your sugar water (four parts water to one part sugar) often during the hot days and do not use red dye.

The one warbler that I want to focus on this month is one of the smallest of our specialty warblers. The Lucy’s Warbler is found mainly in Arizona, parts of California, and the southern parts of Nevada and Utah this time of year. It is a very plain looking bird with a pale gray color, cream-colored breast and the distinguishing feature is a rusty colored rump. It also has a very sharp pointed bill.

Lucy’s Warbler has been known as the “mesquite warbler” and “desert warbler.” They prefer to nest in natural cavities and the loose bark crevices of our native velvet mesquite trees.

The return of the Lucy’s Warbler each year has become synonymous with the start of the spring birding season. You usually hear them singing constantly and loud once they return from their wintering ground along the western Mexico coast. The Tucson Audubon Society has recently started a Lucy’s Warbler nesting box program. Since they are only one of two warblers that nest in cavities, Tucson Audubon has been studying the type of nesting boxes that they might prefer. Their research shows that a triangular box, as shown in the photograph, mimics the shape of a real-world mesquite bark nest.

These boxes can be purchased from the Nature Shop at Tucson Audubon at 300 E University Blvd in Tucson. I will also be building some this summer for next year. Boxes should be put up in January and February. If you have a large mesquite tree in your yard it might be a perfect place for a Lucy’s nest box.

In May, the hot days will drive migrating birds to higher and cooler elevations. I would suggest you start your birding early in the morning here and consider a drive-up Mount Lemmon later in the morning. Lots of rare birds show up near Mount Lemmon each year including the Red-faced Warbler. If you are looking for a little closer place to go, common Black-Hawks and Zone-tailed Hawks are active in May in the Dudleyville-Aravaipa Canyon area.

April and May provide some of the best opportunities for seeing our migrating birds and those that will spend the summer with us. So, go out and enjoy our nature trail here at SaddleBrooke Ranch and venture beyond the gates. Next month I will feature some of the great birding places to see near us and for a day trip. Happy birding!