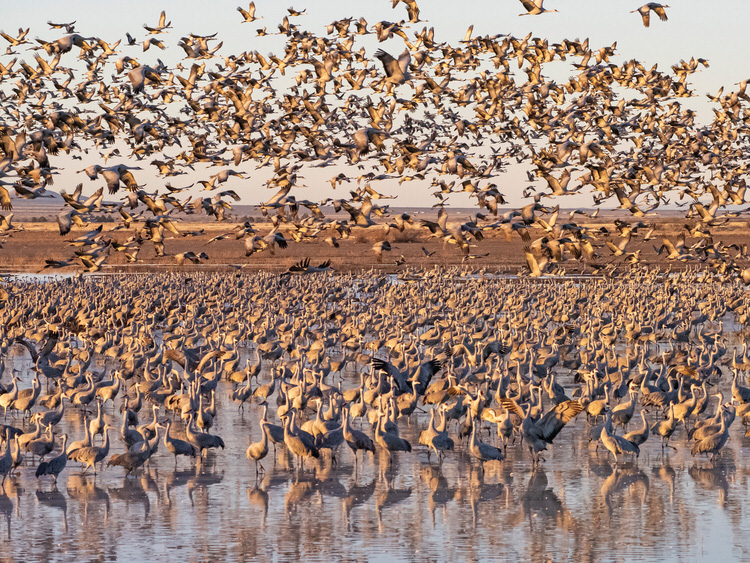 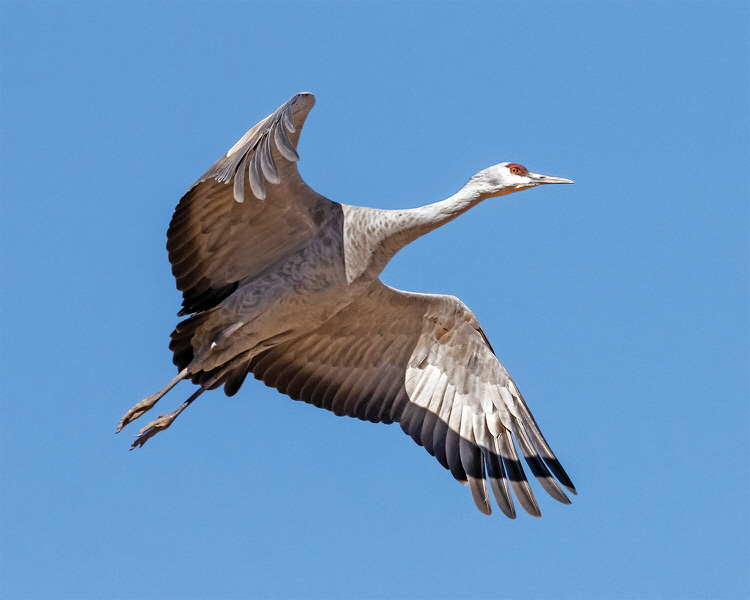 I first heard that Whitewater Draw was a good place to see Sandhill Cranes in winter on one of Jim Hoagland’s monthly bird walks. I had heard of thousands of Sandhill Cranes wintering in Bosque del Apache National Wildlife Refuge in New Mexico, but Whitewater Draw? Where was that? When I found out that it was in Cochise County, and only a two-and-a half-hour drive from SaddleBrooke Ranch, my wife Claire and I decided to see for ourselves. That trip is what sparked this article.

We traveled to Whitewater Draw in early February 2022. The weather forecast was favorable, but morning temperatures were predicted to be well below freezing so we packed heavy jackets, gloves, and stocking caps. We left the Ranch around 7 a.m. and reached our destinations by 10 a.m., just in time to see hundreds of Sandhill Cranes returning to the draw (an area of low ground boxed in on three sides by ridges) after early morning foraging. Wave after wave of cranes flew in and landed on patches of land or in the shallow water in the draw. The cranes called continuously as they approached and landed throughout the rest of the day.

We found the Sandhill Cranes to be large, gregarious, noisy, and conspicuous. They are tall and have a unique shape—a smallish head on top of a long neck that rises from a heavy gray body, with elongated wing feathers that hang along the sides of the body like a feather duster. Adults sport a bright red cap and have white cheeks. When they fly, their necks are outstretched and they have large wingspans.

By late afternoon, the number of cranes had increased to an estimated 20,000 birds and covered large swaths of the draw. Most of the birds had moved into shallow water to spend the night, thereby being less vulnerable to predators, before we left for the day. We spent the night at the Gadsden Hotel in Douglas, Ariz. This historical hotel is delightful, with stained glass windows, great food, and comfortable rooms. We planned to get up early the next morning and drive to Whitewater Draw before sunrise to see the mass exodus of Sandhill Cranes to their foraging grounds in nearby Sulphur Springs Valley.

The next morning, we got up at 0-dark-thirty, put on winter clothes, and headed for Whitewater Draw. We heard a cacophony of sounds as we neared it and were worried that we had missed the main event! Our car thermometer read 18 degrees before we parked the car and hurried along a path to a better viewing area. There, in our near-frozen states, we witnessed one of the most thrilling sights I have ever seen—thousands of Sandhill Cranes rising together in rapture to fill the pink-laden skies above us with their silhouetted bodies! We stayed for as long as we could endure the cold and then headed back to the Ranch with lingering memories of Whitewater Draw, a worthwhile adventure.