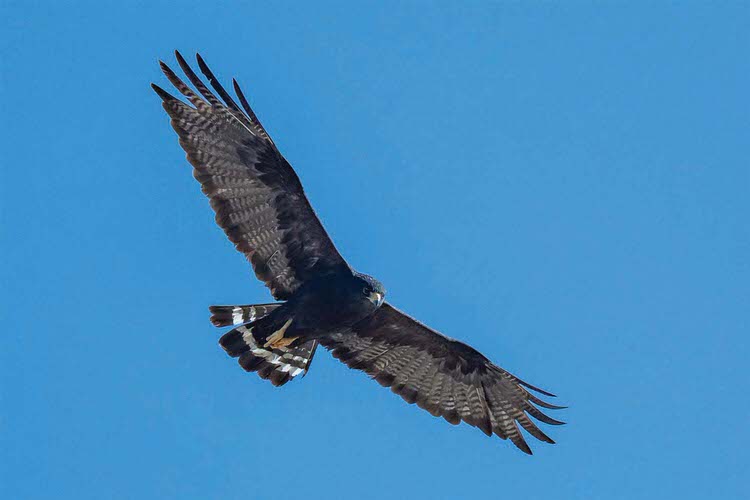 Every March, hundreds of birders converge on Ron Morris County Park in Tubac for the annual “Hawk Watch,” a free event. Hawks, vultures, eagles, accipiters, and other raptors migrate north every March along the Santa Cruz River.

Ron Morris County Park is the Hawk Watch central. Peter Collins from Hawk Watch International is a regular annual counter, one of the best, and will call out the species as they fly over, help you with identification, and answer your questions. Organizers say the best viewing times are March 10 to March 25 from about 8:30 a.m. to 2 p.m.; the peak day is usually March 15. To reach the park, drive south on I-19 toward Tubac. Take the exit to Tubac, go east, turn left at the Frontage Road, and then turn right on Bridge Road. Follow Bridge Road to Calle Iglesia and turn right. This takes you directly into the Park.

Black hawks have been known to spend the night in the cottonwoods in Tubac along the San Cruz River. They will start dropping into the trees in the early afternoon. So, watch closely in the morning as they begin to take flight.

The zone-tailed hawk and the gray hawk numbers are much less than the black hawks. Some gray hawks can be seen in the trees lining the park as they nest in there. Only about 1% of the total population of both the gray hawk and the zone-tailed hawk breeds in Arizona, New Mexico, and Southern Texas before leaving by October for Mexico and Central America. The rest breed in Central America.

All these hawks are found in wooded streams and favor the cottonwoods and mesquite forest.

Besides the three hawks, there are over 20 other species of hawks and raptors recorded during the Hawk Watch.

It is something to see so many hawks, so bring your binoculars, folding chairs, sunscreen, water, and plenty of patience as the skies could be empty sometimes for an hour or two. If you can’t make it to Tubac, take a short drive up to Aravaipa Road near Dudleyville, where some nest in the summer. I saw all three last May along Aravaipa Road in the cottonwoods. I saw the zone-tailed hawk soaring in the desert behind our house.