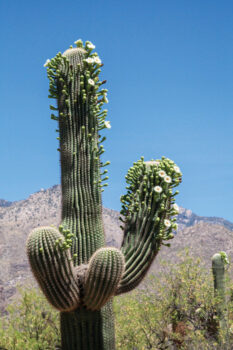 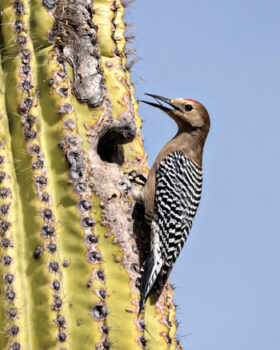 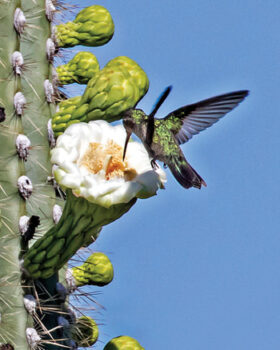 If an icon is a person or thing widely admired for having great influence or significance in a particular sphere, the saguaro cactus is certainly an icon of the Sonoran Desert that surrounds us. What would an Arizona sunset photo be without this iconic symbol in the foreground? Having moved to our home in SaddleBrooke Ranch in June of last year, my wife and I have yet to witness this magnificent icon in full bloom as Arizona residents. We did, however, make a trip to the area several years ago in May and have more than an inkling about what it will be like when the Saguaros come into full bloom this spring.

The scientific name of the saguaro is Carnegiea gigantea, which alludes to the gigantic size some specimens achieve during their relatively long lifetimes. These 12-30 ribbed giants grow slowly and don’t begin to branch out until they reach the age of 50 to 70 years. They may live up to 250 years and reach a height of over 50 feet. The word “saguaro” is a Mexican Spanish word that is thought to have originated in the Opata language (now extinct) in Sonora, Mexico. The word was brought to the United States by the Mexican settlers of the American West.

Saguaros typically flower beginning in late April and peak in May. The large, funnel-shaped blossoms (state flower of Arizona) occur in clusters, each with many white petals surrounding deep yellow centers that attract bees during the day and nectar-feeding Lesser Long-nosed bats at night. The flowers come out at night and live less than 24 hours, but one Saguaro may produce a hundred or more flowers in a season. They are pollinated by bees, moths, bats, and birds. Gilded flickers and Gila woodpeckers drill holes in these tall cactus and nest in them. Ferruginous pygmy-owls and purple martins also make use of their holes. The oblong, nearly spineless fruit of the saguaro ripens in early summer, and eventually bursts open to reveal a bright reddish pulp and seeds that are consumed by many desert birds and mammals.

Human beings have also made use of the saguaro over the centuries. The Tohono O’odham, a native tribe that inhabits this area, historically constructed seasonal camps in saguaro forests to harvest the abundant fruit, which is edible. They used long poles fashioned from the woody ribs of dead saguaros to reach the fruit, which they later cooked to produce a tasty syrup. They used the woody skeletons for many purposes including splints, canes, cradles for infants, fire starters, and firewood. Today people use this prized wood for making many decorative items. Our neighbors have a picture hanging in their home that is framed with Saguaro wood.

Although the saguaros don’t grow naturally around SaddleBrooke Ranch, one doesn’t have to venture far to see forests of them. Hot spots are Saguaro National Park, Sabino Canyon, and the Arizona Sonoran Desert Museum.