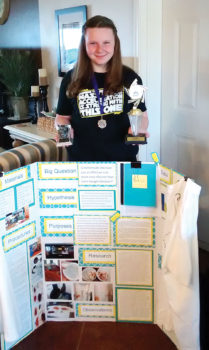 Elena Hendrix with her project board and all her awards

The Oracle School District (OSD) is achieving wonderfully on many fronts. This year the Mt. Vista Elementary School had more participants than ever in the Southern Arizona Research, Science and Engineering Foundation (SARSEF) regional science fair. Held annually at the Tucson Convention Center, the 2017 fair involved over 2,000 K-12 projects and 5,000 students. For the second year in a row OSD 5th grader Elena Hendrix won the First Place Grand Award for her project Soil Garden vs. Straw Bale Garden. Two OSD first grade classes also won the SARSEF Grand Award: Second Place for Excellence in Arizona Hydrological Research with their project, The Water Games and the NASA Earth System Science Award for their project, Gardening with Ollas. A third grade class won the SARSEF Grand Award: First Place for their project, The Dangers of Household Chemicals. Eighth grader Phaius Wolgast won the SARSEF Grand Award: Third Place for his project, Do You Know the Back of Your Hand? As if that wasn’t enough, Elena Hendrix also went on to win Third Place in the State Competition in the chemistry division. This was a first for the district!

In addition to performing brilliantly on the science front, OSD students are enjoying outstanding success across multiple sports. Both the girls and boys track teams recently made a great showing in the Central League championships with the girls winning the overall championship and the boys finishing as runners-up to Eloy. The District also had several Central League individual champions to include: Lily Vigil (Shot Put); Jasmine Goga (hurdles); Damien Cline, Allen Fehr, David Alvarado and Justin Reider (Boys 4 x 400 relay); Damien Cline (200 M); and David Alvarado (Long Jump, and 100 M). Additionally the Lady Cougars softball team has lost only one game and goes into the championship in first place.

As if this wasn’t enough, Mt. Vista Elementary was also recently awarded the Bronze PBISaz Achievement Award for implementing the Positive Behavioral Interventions and Supports program with fidelity. Implementation of this program began two years ago, and results are already being seen in this behavioral modification program, which encourages students to be: respectful of themselves and others, safe and responsible. Mt. Vista’s wonderful staff all got behind the program and that has been the key to its successful implementation. They are most deserving of this recognition of their hard work.

Finally, the District is seeing a dramatic increase in students in kindergarten through third grade now reading at grade level. Superintendent Blauser credits highly skilled staff, base curriculum updates and the Oracle Schools Foundation’s support to offer preschool to more students. Speaking of preschool, the Oracle Schools Foundation will be holding its third annual fundraising gala, primarily to raise funding for preschool scholarships, on October 14 at HOA One in SaddleBrooke. This year’s gala will see a change of formats that should be great fun. Hint: a steel drum is involved! Please save the date and plan on joining in. The Oracle School District is on a roll, and your support plays a critical role in sustaining the momentum!