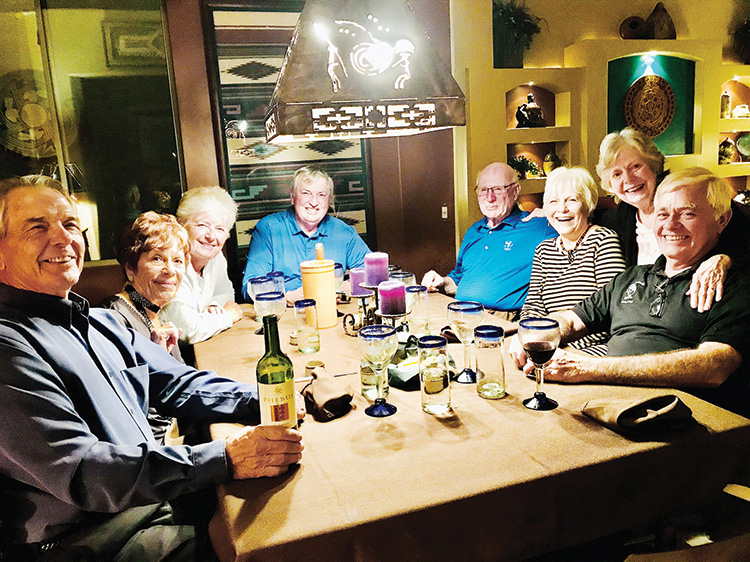 Ann and Nile Vernon and Steve Liakos hosted a Latin American dinner as a live auction item for the Oracle School Foundation Gala. Nile, a former university Spanish professor, who has spent a lot of time in various Latin American countries, wanted to dispel the myth that Latin American food is like Mexican food. Therefore, he developed a menu based on several different countries. Richard Martin, the Gala auctioneer, and his “gang of eight” first tasted appetizers from Mexico: Tiritas de Pescado, a dish quite similar to ceviche, and a specialty in Zihuatenejo, as well as Botana de Jicama, a cilantro and green bell pepper dip served with jicama, a staple in many Latin American countries. To accompany the appetizers, Steve Liakos served Pisco Sours, a typical drink originating in Peru.

The next course was a salad, Paltas Rellenas de Camarones (shrimp-stuffed avocados) from Chile, followed by Matahambre, which is a butterflied flank steak stuffed with fresh spinach, carrots, onions, and hard-boiled eggs, then rolled and cooked for several hours in red wine, onions, and garlic. This dish, from Argentina, was accompanied by Chipa Guazu, a corn soufflé from Paraguay, and Arroz con Coca Cola, Leche de Coco, y Pasas (rice with coca cola, coconut milk and raisins) from Colombia. Believe it or not, there was still room for Pastel de Tres Leches (Three Milks Cake) from Nicaragua.

This event was part of the Oracle Schools Foundation fundraiser. The Foundation was formed several years ago by leaders in SaddleBrooke to address a cause near and dear to our hearts—helping a small, very low-income neighborhood school become “a vision of excellence in public education.” The board adopted the mission of “providing financial and related support to ensure that every Oracle student has unlimited opportunity to succeed” to respond to what we saw as a glaring unmet need. Members subsequently voted to focus its efforts on early childhood education, which was (and still is) directly aligned with current educational research, indicating the payback in that area is seven dollars for every dollar spent. After several years of successful “Champion Building” through ongoing special events, we are proud to say that we are now able to offer free preschool to every youngster in the Oracle community. We also continue to subsidize several other relevant enrichment programs.

If you would like to make a difference for students in need in Oracle, come to the next Gala, currently scheduled for Oct. 25 at the SaddleBrooke One clubhouse. (This date is subject to change based on the COVID-19 pandemic.) Regardless of when we hold this event, you can participate in the live auction and bid on dinners and other special functions, purchase tickets to fixed-price events, such as cocktail parties with musical entertainment (and many more terrific events), or bid on silent auction gift certificates for goods and services. We hope to see you at the Gala!