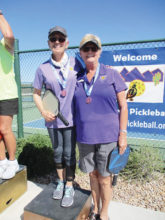 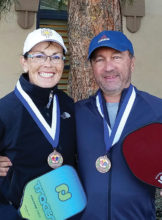 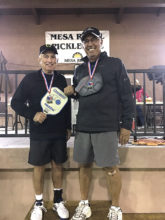 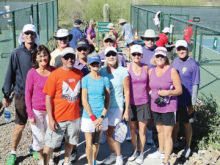 Members of the SaddleBrooke Ranch Pickleball Association (SBRPA) participated in over 15 tournaments during the 2016-2017 season. Many of the members are tournament veterans, having played in many competitions over many years. For others, however, this season was their first experience at this level of competition. Members represented the Ranch well by bringing home over 20 gold, silver or bronze medals. While most events were in southern Arizona (from metro Phoenix south), one member received a medal at the “Dink and Sea” in Mexico! The tournament season is winding down in our general area, but with the popularity of Pickleball, events are scheduled all over the U.S. as well as internationally.

At the tournaments when players aren’t competing they are cheering on their friends. And some of these friends are from other clubs as players foster friendships as the season progresses. The comraderie among players is striking. Within our club, with most wearing purple shirts and jackets, we are known as the “Purple People Eaters” at many of the events. The curious ask about “the purple” and we have the opportunity to talk about our community. And the “tournament team” does not just include players. Members volunteer to referee, and many come as spectators to cheer on the team. The events are competitive to be sure, but the love of playing, refereeing and watching is what makes the experience so great. And winning medals is really not the main goal. For example, the club participated in one event in December and brought home no medals. But many noted that the level of Ranch participation (players, referees and spectators) and the comraderie were at an all-time high.

Many Ranch couples participate in tournaments, and the brave ones even play with their spouses in mixed doubles! There are also doubles competitions for women’s and men’s teams at various skill levels. Something for almost everyone!

Even if you don’t compete it’s a treat to see great play and competition. The SBRPA ends the season with our annual Pickleball Festival, April 19-22, at the courts in SaddleBrooke Ranch. We will have much more about the festival in the next Round Up.