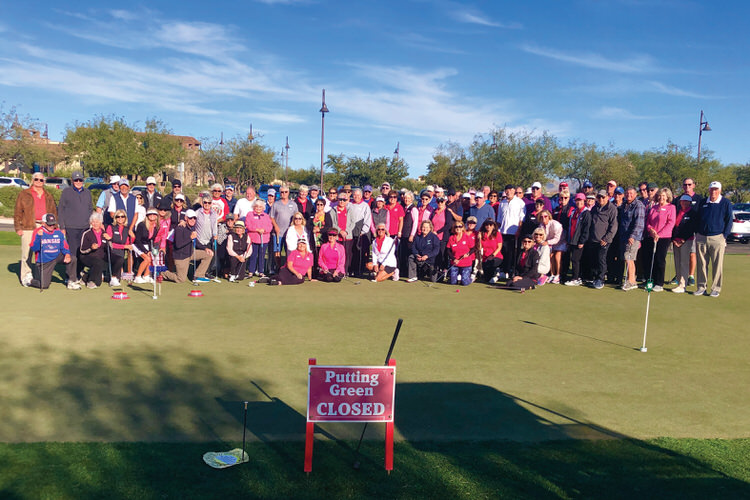 Putters and guests assemble on the green (photo by Camille Esterman)

After an uninvited monsoon washed out a couples’ event, the Ranchette Putters re-scheduled the tournament. On a late afternoon in November, 43 club members and 42 guests assembled on the SBR green—which was filled with an array of obstacles and themed slogans/sayings.

The hole decorated with an Uncle Sam’s hat and patriotic items asked putters to”Thank a Veteran.” A hole surrounded by bananas warned players “Not to Monkey Around.” A basket full of golf balls and a hole marker topped with bunny ears cautioned players to “Not Put All Their Eggs in One Basket.” And Morton Salt boxes, a small sombrero, and a tequila bottle encouraged putters to shoot for “A Lost Shaker of Salt.”

Using croquet mallets on one hole and starting two holes from the rough added additional challenges to the fun-filled tournament. Much laughter was heard and some moans were detected as mixed teams recorded their scores, before socializing in the La Mesa Room.

The Ranchette Putters congratulate all the winners from our Couples’ Tournament and thank Jodi Walker-Lowe and her event team for putting together this fun event.