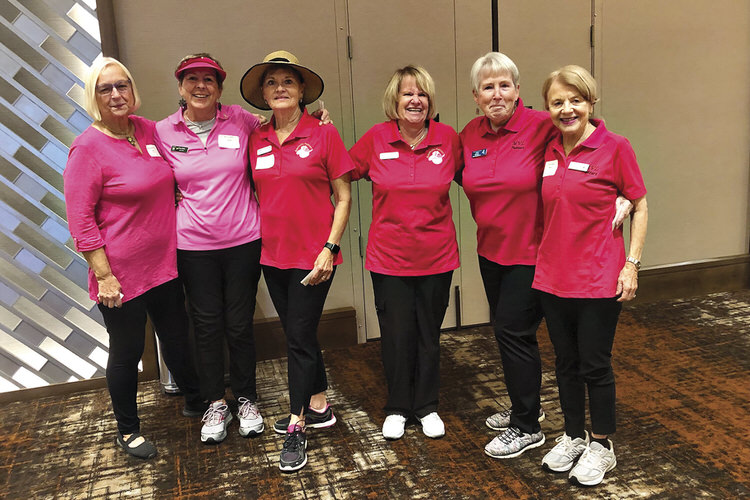 On a cool, sunny morning in October, 55 Ranchette Putters were delighted to welcome 44 MountainView Lady Putters to SBR. Everyone was excited to reinstate an annual tournament that has been suspended the last two years.

As colorful fall leaves fluttered on the green, the clubs (both wearing pink shirts) assembled for a photo. Club pro, Mike Jahaske, was recruited to capture the smiling faces before mixed teams headed to their assigned holes.

Bumpers had just been placed on nine of the holes on the SBR green. And if a putter hit one of them, that shot was considered sunk. This perceived advantage soon disappeared, as balls skimmed by the bumpers without being able to catch the lip of an actual hole. Only two ladies individually aced 4 holes: Terri Stewart and Sheliah Drewienkowski (both putters from the Ranch).

‘Fall in Love with Putting’ was the theme in the Sol Ballroom. Tables were decorated with bags of candy corn, fall leaves, leaf-shaped lollipops, and hurricane vases containing raffia and mini pumpkins. Everyone enjoyed their turkey club croissant sandwich, served along with a tasty spiral pasta salad. A fresh fruit cup, two chocolate cookies, and beverages completed the luncheon.

Thank you to Tyler and the Ranch House staff for helping us entertain the MountainView Lady Putters. Before leaving they extended an invitation to join them next year in a tournament on their green. It was so much fun putting together with our friends from SaddleBrooke.