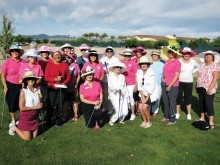 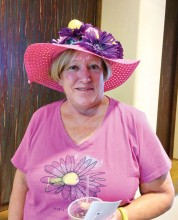 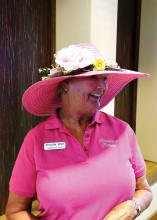 Having a little fun while Wicket Putting, 20 Ranchette Putters wore their big hats to the greens. Besides putting we voted on the best hat, won by Beena Ordahl; most colorful hat, won by Beena Ordahl and Priscilla Wolf; and most putter inspired hat won by Linda Parker. We had three money hole winners: Cathy Johnson, Deb Lawson and Janice Neal. There were at least 14 women with holes-in-one, with two putters with four, Gloria Ihrig and Corine Sturdivant; one putter with five, Deb Lawson and one putter with seven, Janice Neal. Deb Lawson had the lowest score, 39.

On May 13, Ranchette Putters return to SaddleBrooke HOA One for regular putting.

Since the putting green at SaddleBrooke Ranch is not completed yet, the Ranchette Putters will take a hiatus starting on May 27 and returning to putting on July 15. Enjoy the summer off.