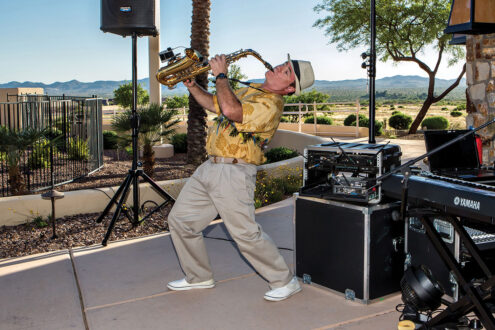 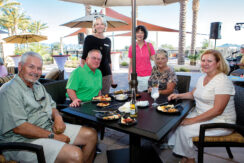 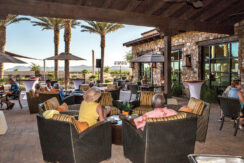 The residents enjoying the music and the evening 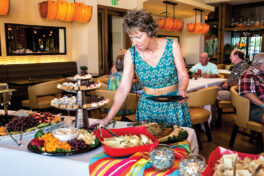 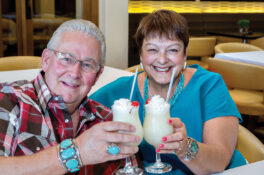 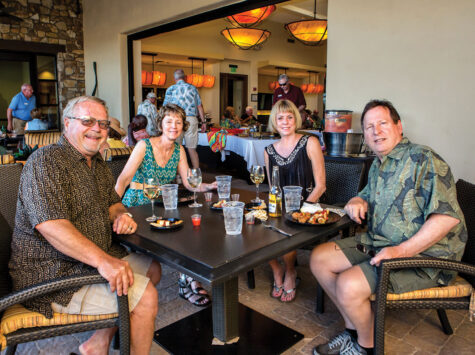 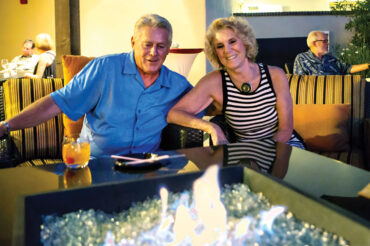 Steve and Judy Andrasic sitting behind the fire pit 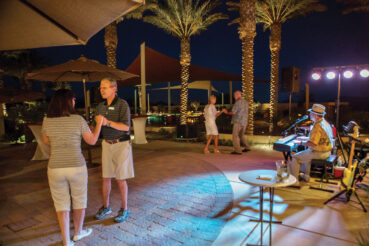 On Friday evening, June 12, between 6:00 and 9:00 p.m. the Bistro Viente and the Bistro patio of La Hacienda Club were transformed into a relaxing and entertaining environment where residents could talk to each other with cocktails, appetizers and music. With the help from Caroline Reis, Bistro manager, Danielle Herbert, Bistro supervisor, and Andrea Marchus, La Hacienda Club administrative and facilities coordinator and the Bistro staff, the first ever patio party was held. This party was planned at the suggestion of the social committee. At first people at the sold-out event were hesitant to go outside to the patio remembering the near 100 degree day that just passed. But the walls of La Hacienda Club shielded the setting sun, and a mild breeze resulted in a wonderful twilight climate.

When people arrived they were treated to special cocktails to support the southwest theme. Those special cocktails included a blazing hot tamale drink and a strawberry jalapeño pepper margarita at special prices. Next the staff brought out some street tacos, southwest chicken egg rolls, humus, mini tamales with salsa, assorted cheeses, crackers and fruit with assorted desserts to sweeten the palate. Once their hunger was satisfied the residents realized there was live music. Outside on the patio Harry Mathews provided what was described as easy listening/cocktail music. Harry, who is a classically trained vocalist, not only sang songs but also played the guitar, the saxophone and the keyboard. His show included a wide variety of music including songs originally performed by Sinatra, Elvis, Fats Domino, Kenny G. and Neil Diamond.

After the sun set the night became cool with the lights from the candles and fire pit providing extra atmosphere. Some residents were lulled into dancing to the music under the stars. Andrea Marchus said that although this was the first such patio party at the Bistro it hopefully was not the last. In fact, the Bistro is experimenting with live music on the patio as part of the Thursday Happy Hour activity the third Thursday of June, July, August and September. On June 18 and August 20 Lindsay Nicholson is scheduled to perform Jimmy Buffet style music. On September 17 Joe Bourne is scheduled to perform oldies style music. On July 16 the performer has not yet been finalized. You can find who will be playing that night by watching for the e-mails sent out by the Homeowner’s Association.