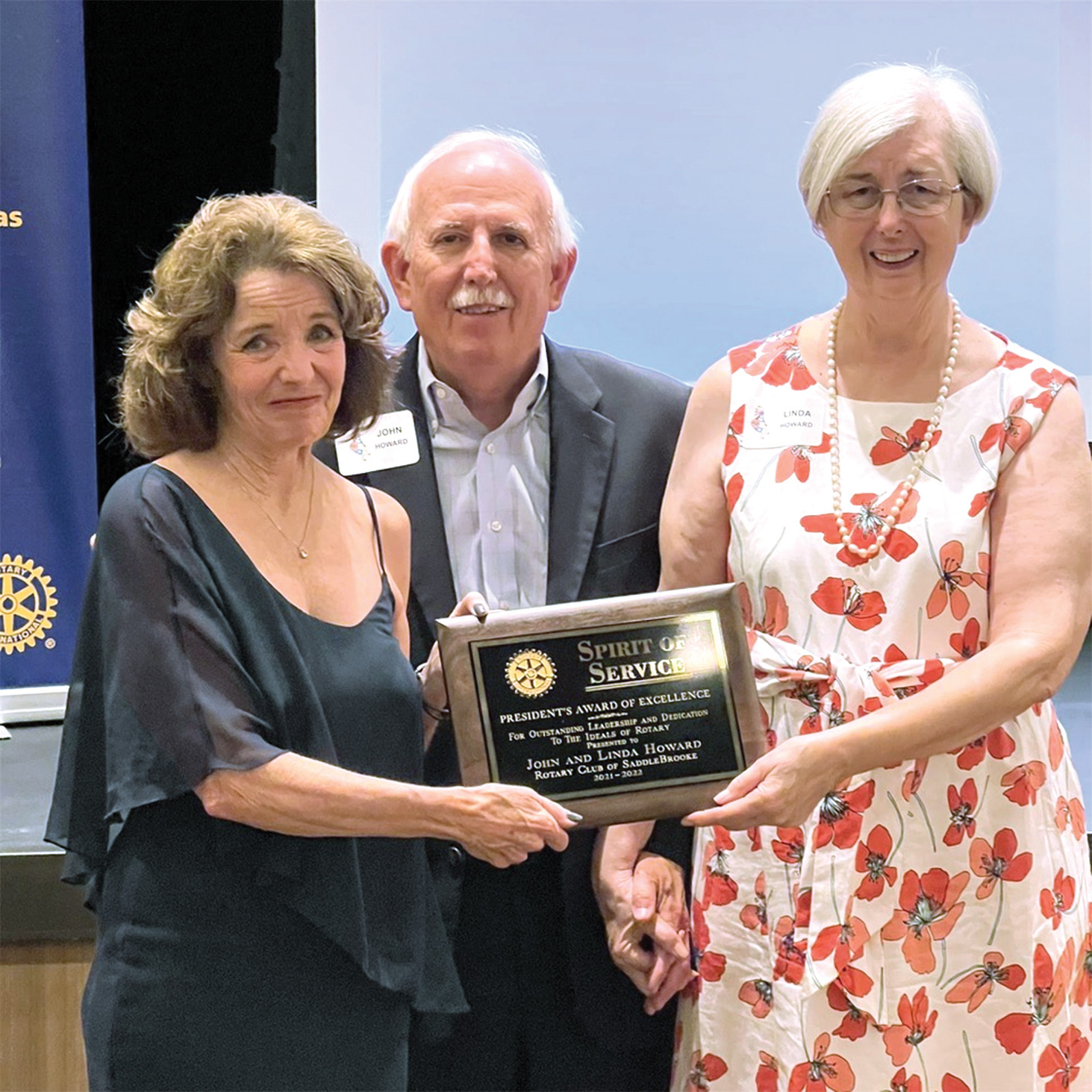 Outgoing President Liese Razzeto honors Rotarians John and Linda Howard with the President’s Award of Excellence for their outstanding service to Rotary and the community. 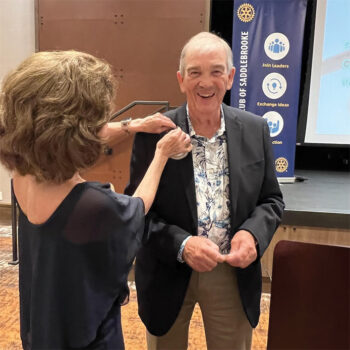 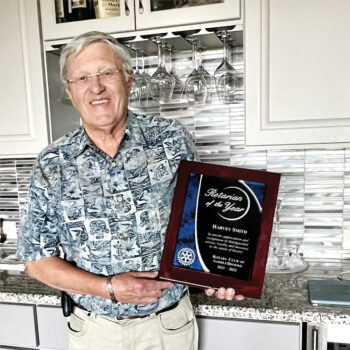 Harvey Smith was honored as Rotarian of the Year for his outstanding work for the Rotary Club of SaddleBrooke.

Each and every June 30 at midnight, Rotary International passes the gavel to new presidents and officers as we start the new Rotary Year. Rotarians around the world celebrate the event with special dinners and parties. This year the Rotary Club of SaddleBrooke celebrated with a dinner dance in the ballroom of the Ranch House at SaddleBrooke Ranch. Chuck Moses provided the entertainment following the traditional passing the gavel events.

Outgoing president Liese Razzeto reviewed the many outstanding accomplishments of the club’s award winning 2021-2022 year. A 30+ year veteran of Rotary, Liese also served as club president and Assistant Governor in Idaho before retiring as regional president of Wells Fargo Bank and moving to SaddleBrooke Ranch. During the celebration, Liese also recognized the club members who did so much to make a difference to our club, the community, and globally. Special recognitions were awarded to Linda and John Howard for their service to the club, while Harvey Smith was recognized as the Rotarian of the Year. Following an incredible video posted on You Tube (youtu.be/Nb29zLgg_bl), Liese passed the gavel to Gordon Wainwright.

As new president of the Rotary Club of SaddleBrooke, Gordon comes with many years of Rotary experience. Over 20 years ago, Gordon joined the largest Rotary Club in Canada in Calgary, boasting over 350 members. After a successful career in management with the telephone industry, Gordon retired to Ajijic, Mexico, where he served in fundraising for hospice and was an active Rotarian. This was followed by a move to the United States and Indio, Calif., and membership in the Indio Rotary Club. Gordon and his wife Heather moved to SaddleBrooke over three years ago. He became an active member in the SaddleBrooke Rotary Club and became an American citizen just last October.

When thinking about his 20+ years in Rotary as a member of four different clubs, Gordon Wainwright commented that, “We learn so much from each other in Rotary. Rotarians come from such diverse backgrounds and have so much talent. Those who are retired now have the time to give back and make invaluable contributions to so many others in need.” Rotary International is the world’s largest volunteer organization. Rotary is in more countries than the Red Cross, McDonalds, or Starbucks.

The Rotary Club of SaddleBrooke is an award-winning organization devoted to making a difference locally and globally. It is also a club that enjoys coming together for lunch and lifelong learning. We currently meet weekly at the Ranch House at SaddleBrooke Ranch and on Zoom. Plus, we enjoy getting together for social events and service projects. We have fun making a difference.

The Rotary Club of SaddleBrooke is open to anyone who is living or working in SaddleBrooke, SaddleBrooke Ranch, Oracle, Catalina, Oro Valley, the Copper Corridor, and all surrounding communities. For more information, contact Wendy Guyton at 520-404-5712 or [email protected]