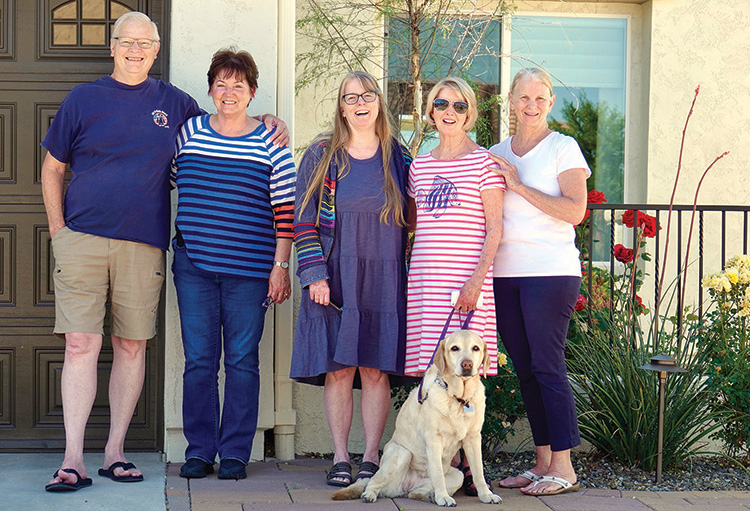 The Barringer family with Shasta, their beloved dog

Dale Barringer and his wife Terry have been Ranch residents for eight years, having moved from Southern California, where Dale grew up. On May 2, after a series of medical issues, he passed peacefully with his family beside him.

In 1948, at the age of 14, Dale was named Mr. Hollywood Jr. for his dancing—which included tap, soft-shoe, and ballroom—his musical talent, as well as his acting skills, where he appeared in 14 films and shows. By the time he was in high school, he had more interest in sports than movies. He played football, but his love was tennis. He played competitive junior tennis and was seeded fifth in the state. Dale also enjoyed a 43-year career with Southern California Edison, where he retired as Manager of Transportation and Aircraft Operations. During this period, he met Terry and in 1968 they were married. Eight years later, because of Dale’s love of aviation, both Dale and Terry earned their pilot’s licenses. In addition to flying, Dale was passionate about ocean fishing. He was also a weekend golfer who enjoyed the fellowship of the game. Dale had three children, eight grandchildren, and 17 great-grandchildren.

When members of the Ranch learned of Dale’s passing, many immediately put together meals for Terry and their family.

Also, because of social distancing in the time of the coronavirus, friends came together to coordinate a condolences parade, with golf carts and cars passing and depositing condolence cards in a box in front of the house, with the family and their beloved dog, Shasta, looking on. There was an outpouring of love and support by the community and it was touching, heartfelt, and a sweet tribute to Dale and Terry. Dale will be greatly missed.