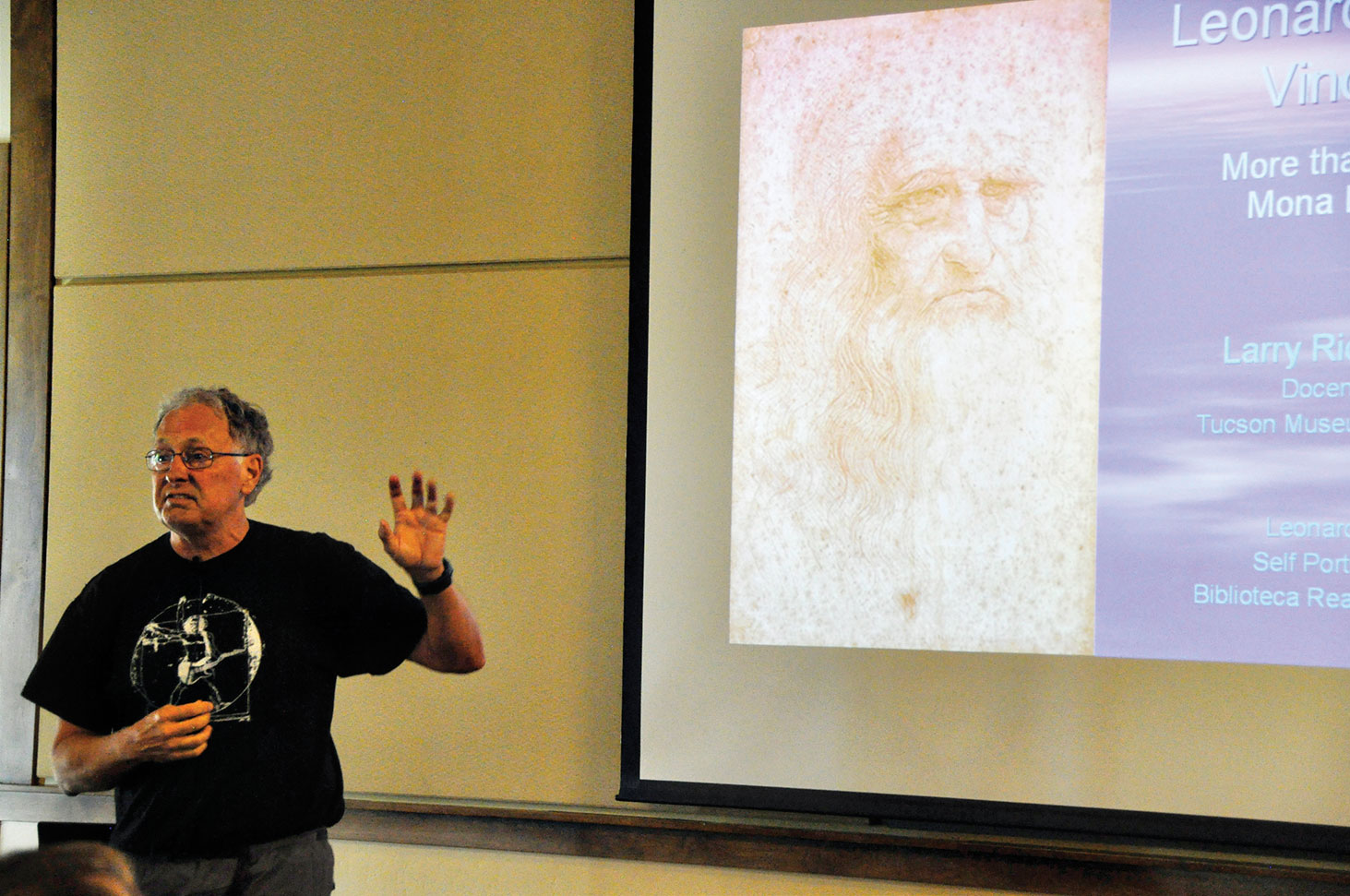 Larry Richter’s topic for the lecture series was an in-depth view of Leonardo da Vinci’s life.

“Leonardo: More than the Mona Lisa.” We all have studied Leonardo da Vinci in our early years of school and recognize the painting of Mona Lisa to be one of his greatest works of art as well as The Last Supper, but much of his other incredible work is often overlooked. On Thursday, May 21, local SaddleBrooke Ranch resident Larry Richter gave a presentation that went deeper into the life of Leonardo.

In Larry’s previous life he graduated with a major in geology and chemistry. He decided he would have more fun as a high school physics teacher and started an award winning robotics program. He was always drawn to the life of Leonardo, not just for his painting but he was a groundbreaking scientist, engineer, mathematician and anatomist whose considerable accomplishments often go unrecognized. Since living in Arizona, Larry has nurtured his other passions of music and art and began doing more research on the true Renaissance Man. He prepared a lecture for the Tucson Museum of Art on Leonardo, which was well received. The SBR Lecture group was thrilled to hear of Larry’s work and asked him to speak at the Ranch.

Leonardo lived a life filled with inspiration but also with unhappiness and moments of despair. Being welcomed in Florence as a great painter of the day brought him great joy. He was renowned primarily as a painter of major works but also known by his numerous drawings in his notebooks. One drawing has become a cultural icon, the Vitruvian Man. Besides painting he is revered for his technological ingenuity, making substantial discoveries in anatomy, civil engineering, optics and hydrodynamics. He conceptualized flying machines, an armored vehicle, robotics, an adding machine and so much more that were not feasible during his lifetime. Some of his smaller inventions did enter into the world of manufacturing in his day.

Born on April 15, 1452 in Vinci, Republic of Florence to a notary, he was an apprentice to the artist Verrocchio, learning theoretical training as well as a vast range of technical skills. He did numerous anatomical studies on cadavers, documenting his studies in great detail in his journals. He was left-handed and wrote most of his personal notes in mirror-image cursive, but many of his notebooks about his scientific studies were written to document his work. He was a man of great curiosity and inventive imagination.

Special note: The SaddleBrooke Ranch HOA Lecture Series group is making changes. There will only be one presentation a month, unless a special speaker can attend. The talks will be on the fourth Thursday at 4:00 p.m. in La Mesa/Montana rooms. We are also changing the name to SBR Thursday Talks. Watch the HOA weekly reminder for topics for our talks.