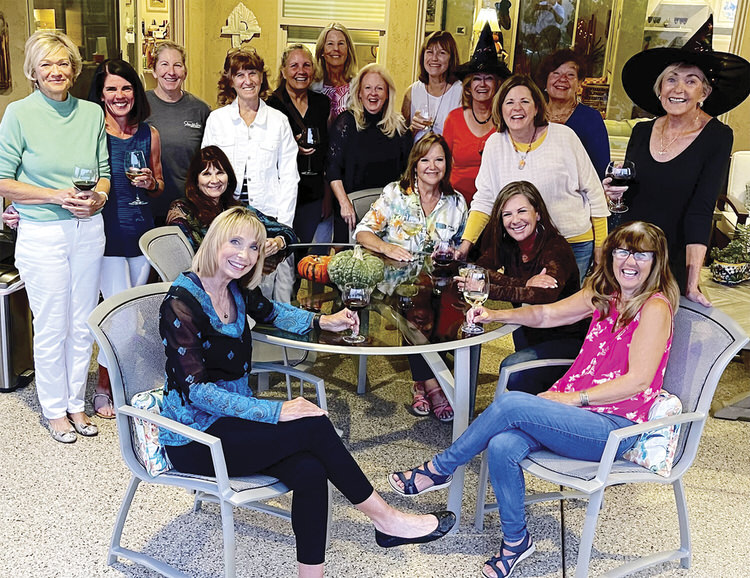 About a year ago, club member Lynne Wescott decided to organize an informal group of pickleballers—one of several here at the Ranch. They call themselves the “Volley Girls,” reflecting their passion for volleying. As Lynne puts it, “Volley Girls offer a different perspective when it comes to pickleball. There’s as much or more socializing and laughter than there is actual play. We don’t want anything to interfere with our fun.”

The Volley Girls organization has grown rapidly during its initial year—so fast, in fact, that membership has been closed because they are unable to accommodate any more players at this time. The group’s popularity is due in large part to a common desire to laugh, support each other, and even play a bit of pickleball.

The Volley Girls are distinguished from other groups by the emphasis they place on having fun while playing pickleball. It’s not that good competition among the members isn’t encouraged. In fact, they thrive on competition. The difference is the exuberance they display before, during and after a round of pickleball. Some members have moved up the ratings ladder and they have been supported in doing so. However, they also seem to follow a more deliberate path to higher ratings—building a solid base of technical skills along the way.

Pickleball has developed a passionate following nationwide due to its friendly, social nature, and its multi-generational appeal. As the sport sweeps across the nation and around the globe, it’s winning hearts and inspiring devotion on a deep level. According to InPickleball magazine, “the game ignites a transformative passion among those who pick up the paddle. To simply call pickleball a sport doesn’t do it justice—both comforting and exhilarating, it’s a full-fledged lifestyle. Official estimates say there are about 5 million pickleball players in America, but that figure is probably low. It’s about more (much more) than the sheer thrill of the game—triggering something bigger, happier, healthier, and kinder in the lives of players.” It’s an opportunity to get outside, to be with people, and to play. “It’s what’s so desperately needed now for our well-being. Fun and togetherness matter,” says Susie Moore, life coach, podcast host, and author of Let It Be Easy. “I’ve seen a real shift in people who play. Some have found friends, some found romance, some lost weight. It’s heartwarming.”

The SBR Volley Girls are reminding all of us about some basic principles regarding pickleball—have fun, be safe, and take the time to grow your technical skills.