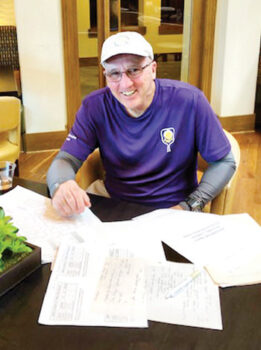 There were thirty pickleball players when play began in late 2010–11. The courts were reserved for member play four days a week, Mondays, Thursdays, Saturdays, and Sundays. Members of the SaddleBrooke Pickleball Club came over to work with the Ranch players to teach them the game. Equipment was kept at the fitness center, where you can still check out a paddle today.

By 2014, the club had grown to more than 115 members. SaddleBrooke Ranch had the highest percentage of players per home of any active adult community in Arizona.

In April 2014, the first annual pickleball festival was held for members. There were four skill levels (2.0, 2.5, 3.0, and 3.5). More than 60 players participated. Rich Ferris, Chris Jerman, and Bob Hills organized this event.

With the number of players growing, skill levels increasing, and social and competitive tournaments, the quest for courts became an important topic. Three things had a major influence on the current pickleball courts.

First, Bob and Bill led a project to define a set of court requirements, some of which included the obvious measuring out the court dimensions (at times on their hands and knees), fencing, and where to place the gates, to the less obvious details such as the width between the courts, and location of the shades, water fountains, and water spigots for hosing off the courts.

Secondly, Bob, with the assistance of Bill, came up with a business justification on why Robson should build a big court complex. Forecasting membership growth for the subsequent ten years, using graphs, data on the growing popularity of pickleball, and how amenities attract new home buyers, they suggested 24 courts rather than fewer, to carry the association further in time. This would allow for intracommunity play, where large groups of players from one community visit another to play and for tournament opportunities. Michelle Diehl contributed good visuals.

Thirdly, there was a meeting of Bill and Bob with the key decision-makers: Jack Sarsam (Robson vice president of operations), Tim Fudge (SHR HOA) and Jason Hatch (SBR sales). Their hour-long meeting ended up being 2 and a half hours!

The requirement document played an important role in the outcome of the meeting. Twenty-four new courts—instead of the proposed 12 or 16 courts Robson was considering—were built at one time and added gradually as they were finished.

In December 2016, SaddleBrooke Ranch hosted their first intercommunity tournament. Membership in the club was more than 280 players.

As the SaddleBrooke Ranch community grows, more and more residents will be joining the pickleball club and putting court time to the test. As of Aug. 21, there were 542 pickleball members! Perhaps it is time to push forward the next generation of courts. Planning and construction take time, so Robson needs to be measuring, designing and proposing the next set of courts so we don’t get into a pickle!