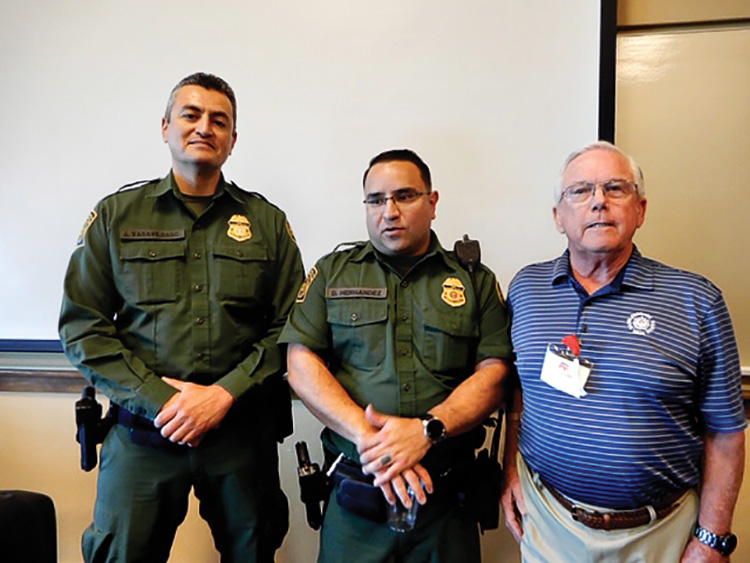 On Aug.19, Agents Daniel Hernandez and Jesus Vasavilbaso, from the Tucson sector of CBP, gave an update to more than 80 club members and interested residents on the status of their operations in southern Arizona. The agents stressed that the CBP is apolitical and that their goal is to educate the public and enforce the laws (last updated in the 1980s) that they are tasked to follow. The presentation was well delivered by these well informed and, often, quick-witted agents (nothing like a little laughter to help the medicine go down!).

The mission of the CBP is to “safeguard America’s borders thereby protecting the public from dangerous people and materials while enhancing the Nation’s global economic competitiveness by enabling legitimate trade and travel.” (see CBP.gov) The agents described their agency as the “tip of the spear” in this effort. While the agency was created in 2003, its origins stem from a multitude of services and organizations beginning in 1789 with the U.S. Customs Service and including the establishment of the Border Patrol in 1924. According to the agents, there are currently more than one million immigration cases on the books in our country awaiting trial.

The agents shared longitudinal data regarding the Tucson sector. In 2018, for example, there were 52,000 apprehensions of immigrants crossing the border illegally. The trends over the last several years indicate that marijuana smuggling has gone down, but smuggling of hard narcotic drugs has increased. While the data for 2019 is not yet available, the numbers of apprehensions will likely trend considerably higher due to the increase in sheer numbers of groups (some more than 400 at a time) crossing the border. The holding facilities available were designed for single male adults with less than 24 hour holds but, today, families make up an increasingly large percentage of detainees. Agents have had to be peeled away from law enforcement duties to deal with the ongoing humanitarian crisis these changing demographics create. Contrary to popular belief, most of the families entering in the past year have never been in our country before and will remain intact unless there are mitigating factors such as a criminal history on the part of one or both parents or concerns that children do not belong to the adult with whom they cross. The agency’s primary responsibility in these cases is the safety of the child.

When asked what works best for maintaining border integrity, the agents emphasized that various combinations of technology, infrastructure, and personnel, depending on the needs in particular areas, works optimally. There is no one size fits all.