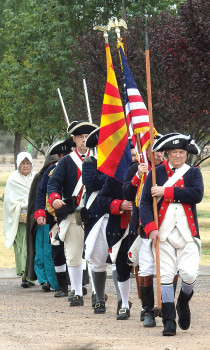 Sons of American Revolution presenting of the colors

After weeks of clear, sunny desert weather, the morning greeted our troopers with dark, cloudy skies, light rain and predictions threatening a downpour. Meeting early to carpool the 25 miles, volunteers followed Kay Lantow and Chuck Robbins down Oracle Road for the 10:00 a.m. ceremony.

The Worcester Wreath Company of Harrington, Maine organized Wreaths Across America in 1992, placing their wreaths at Arlington Cemetery. By 2013, with the help of volunteers and corporations, 540,000 wreaths were donated and placed at over 900 participating locations.

Sheron Jones, president of American Gold Star Mothers in southern Arizona, took charge of this year’s event in Tucson. Kay Lantow met Sheron in October when she spoke at a valley luncheon in Oro, seeking volunteers and contributions for the 5,000 plus veterans’ graves in southern Arizona. Kay enlisted Linda Nicholson, and they set out to recruit help.

Under a light rain the ceremony began with the Sons of American Revolution, dressed in Revolutionary War period dress, posting the colors, and our National Anthem sung by the Tucson Desert Harmony Chorus. Sheron Jones steered the ceremony that included keynote speakers Tucson Mayor Jonathan Rothschild and State Rep. Mark Finchem. The Sons of American Revolution concluded with a musket rifle salute, followed with Taps played by SPC Monique Grijalva, and closed with Amazing Grace performed on bagpipes.

As the wreaths were unboxed, our troopers lined up with dozens of volunteers, looping the beautiful bow adorned evergreen wreaths over their arms and headed into the veterans’ sections of the cemetery. Undaunted by what had now become a cold and heavy rain, the volunteers searched out the veterans’ grave markers and while laying the wreath recited a silent prayer and offered thanks. Carol Sorensen commented, “More than all of us gathering in the rain, the speeches or the three-gun salute; it was stopping at a grave marker, reading the name and saying a silent prayer and then looking up and seeing so many wreaths that impressed me.”

Afterwards, Peggy and Bill Beatty shared their thoughts with Linda. “Participating in the wreath laying ceremony was an honor and a reminder that we must never forget their sacrifices and that for sure ‘Freedom isn’t free.’” Mike and Carol Fielding also expressed their thoughts. “It was an honor to participate in this opportunity to show respect to our veterans. Hope we will have even greater participation next year.”

Finally, Mary Ann and Pete Mehlhorn offered a poignant insight. “It was those men and women, really almost too young to be adults, who had been the ones who had sacrificed the most for our freedoms.” And even with 750 wreaths donated, not all veterans’ graves could be honored.

For more information about this event and these groups, contact: