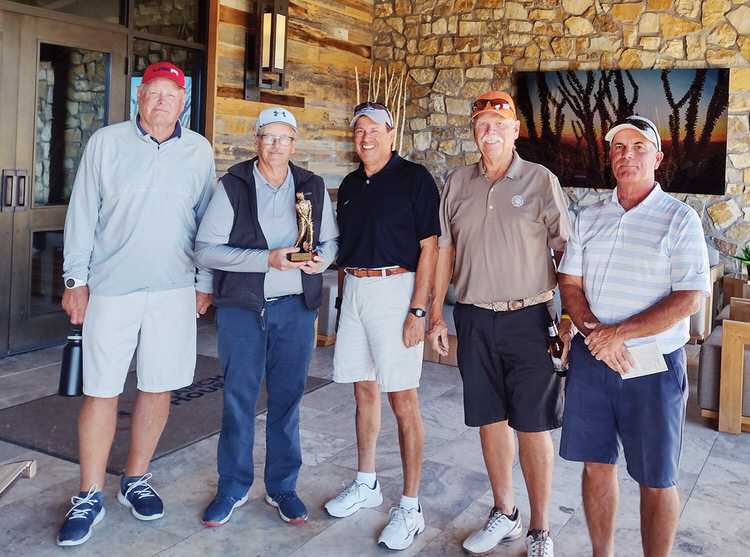 The 10th annual SaddleBrooke Ranch Men’s Golf Association (SBRMGA) Founders’ Cup Tournament was recently completed. The two-day, 36-hole, full course handicap tournament was an unqualified success. It’s a special event, as we have, continuing their membership, four of the original members of the MGA. We pinch our bill to Ken Hull, Paul Lapotosky, Dave Bott, and Mike Koen. We thank all for their forethought in creating the SaddleBrooke Ranch Men’s Golf Association.

On any given day, a golfer may best their handicap. We had two golfers best their handicaps with net scores below par for the two-day tournament. Our winner of the Founders’ Cup Tournament, Jayson Claar, the first two-time winner, recorded a 3 under par total of 141. The overall second place golfer, Frank Sherfy, recorded a 1 under par 143 two-day total. Congratulations to both.

The Woods Flight was won by Bill Oprish with a two-day total of 151. On Bill’s heels was Doug Redfield, 1 stroke back, and Rod Linville and Jim Mulhall, each 2 strokes back.

In the DeChambeau Flight, Brian Grover took honors with a 146 that included a red-hot second-day round of even par 72—hot, hot, hot. The next three finishers included Kevin McCarthy, Guy Shelton, and Larry Tipton, each with a 150. Grover was in fourth place after day one, but more than warmed up for day 2.

The Johnson Flight winner, Rob Ortega, carded a 153, followed by Lou Mastro, 2 strokes back, Steve Schneck, 3 strokes back, and Ron Nunn, 4 strokes back. Mastro was in fifth place after day one and carded the best round of the flight on day two to move into second place.

In the Koepka Flight, Jack Hunter came roaring back from a day one third place to win the flight, carding a two-day 153 total. A trio of golfers finished 1 stroke back at 154, including Jeff Hansen, Ken Hull, and Greg Byrne.