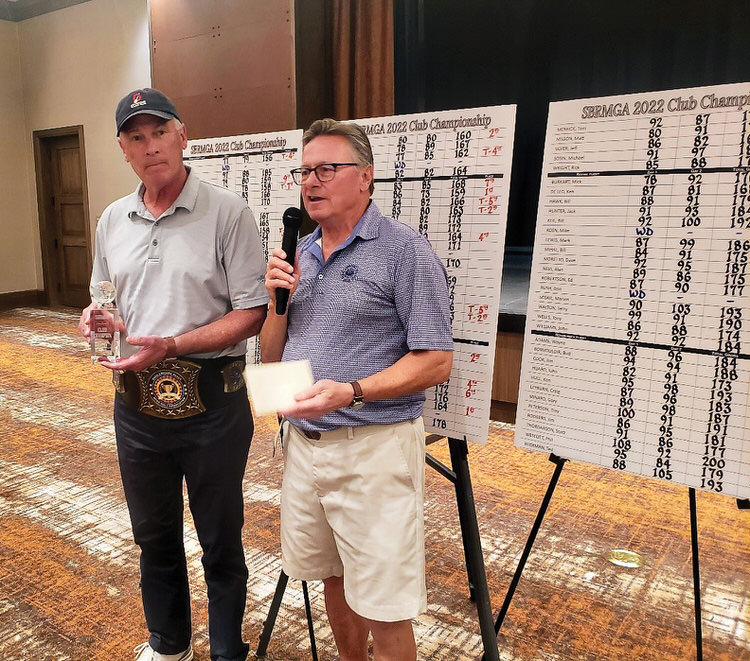 The SaddleBrooke Ranch Men’s Golf Association (SBRMGA) Club Championship was held April 13 and 14, providing a welcome distraction before Tax Day. It is the MGA’s premier low gross tournament of the year. The field for the two-day tournament totaled 100 entrants, making it our largest field for the event. The 2022 championship consisted of the Championship Flight and five additional flights. Twenty-five members declared to compete to be Club Champion. The five additional flights were populated by narrowly matching the course handicaps of the members.

The Coyote Flight winner, Phil Bartko, rebounded from a six-stroke deficit after day one with the second lowest round of the tournament (73) day two to take first place with a 159. Tied for second were Mike Chonle and BJ Shultz carding 163; and in fourth place was Frank Happ with a 164.

The Diamondback Flight winner, Paul Knott, set the tone with a score of 164. Following Paul in second was Jayson Claar at 166, third was Jeff Silver at 168, and fourth was Tom Graham at 169. Results of a single hole or two separated the four golfers over the two days.

The Redtail Flight winner, Ken De Leo, rebounded from an 11-stroke deficit to win the flight carding a 168. Second place finisher Mick Burkart followed with a 170 and Tony Wells was in third with a 174. In a tie for fourth at 175 were Bill Mihal and Alan Ness.

In the Roadrunner Flight after two days. only 11 strokes separated the top four finishers. Finishing first with a 173 was Jim Cook. Jim Rodgers seized second with a 177, with Phil Wescott at 179 for third and Troy Peterson in fourth place at 181.

Making the Club Championship a success was our roving rules committee, including Rod Linville, Mike Jahaske, Ken Steinke, and George Price. Our scoring volunteers George Price, Mick Borm, Eric Taylor, Jeff Pharr, Ken De Leo, and Tom Graham made certain all scores were recorded correctly. Importantly, our thanks extend to the tournament director Bruce Haney and our participating members for making this a great event.