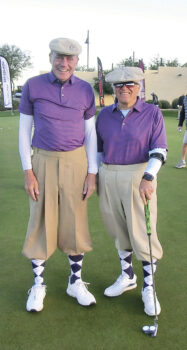 The SBR Men’s Golf Association, together with the SBR Golf Club and the SBR Robson Community, welcomed 98 golfers to the 2022 Member-Guest Tournament. We entertained guests from Alaska, California, Colorado, Florida, Nebraska, Nevada, Oregon, Texas, Washington, and elsewhere in Arizona. In the days preceding the tournament, our guests arrived, visited our Ranch community, the region, and of course enjoyed their practice rounds. A luncheon was also held for spouses and others in our Ranch Sales Office and models.

The tournament started Tuesday afternoon with a putting contest on a specially designed course by our own Dan Carter and a barbecue. The first day, 49 members and their guests—in cool but sunny weather—began the tournament. At lunch, with the posting of day one results, the 49 teams headed to the flighted 3 hole with chip off horse race culminating in the combined winners going an extra hole to determine the overall winner.

Day two began with Mother Nature proving that the birthplace of golf with its windy, cold, and wet weather can happen in Arizona as well. The conditions were challenging, not just for our 49 teams but also our volunteers. Yet, the golf was surprisingly good. We had teams making moves up the leaderboard. Competition was stiff with celebrations rampant. At the end of the day, an awards banquet was held recognizing all who made it successful and of course awarding prizes.

The top four places graced all flights. The top team overall was Dan Anderson and guest Dave Condie. Nipping at their heels by only a half point behind was the team of Tim Baker and guest Kurt Shultz. In third place overall was the father-son team of Mike and Josh Eby. Following in their footsteps was the fourth-place team of Sam Rossi and guest Peter Wright. Congratulations on a tournament well played.

The six-hole putting contest ended in a tie with Jim Hayek and Mike Ohanian.

There were eight closest to the pin awards: Ed Cheszek (2), Mick Borm, Jim Harvey, Tom Grawe, Glen Armstrong, Deane Manning, and Lynn Buri. Each par 3 had a specific hole-in-one prize. This year, none were earned. Perhaps next year we’ll have a big winner.