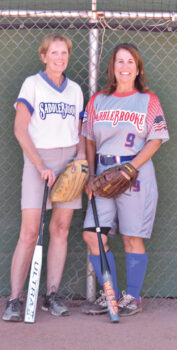 On an early Wednesday morning last month, under a perfect blue sky and on a gem of a ball field in SaddleBrooke, Mary Schneck singled to right field to drive in two runs. It was one of two hits that day for Mary, but unfortunately, it wasn’t enough as her Western Exterminator team lost to Absolutely Art 23 to 18.

Schneck is one of 11 women who played this summer in the SaddleBrooke Senior Softball league, which is celebrating its 15-year anniversary this year. The league consists of about 165 men and women playing year-round, Monday through Friday in five different leagues based on skill level.

Schneck is the manager of her team that finished in first place and clearly its leader. She coached first base, pinch ran for slower runners, offered advice to anyone who would listen, and encouraged her players nonstop (but was toughest on herself). After a nifty catch in right center field—but followed by a slow groundout to second base in the next inning—she shook her head and said, “You do one good thing but then follow it with one bad thing. So dumb.”

Schneck is relatively new to softball. She didn’t start playing until moving to SaddleBrooke Ranch several years ago. She initially watched her husband, Steve, play and decided she’d like to do the same.

The four women who played in that game combined for 14 hits in 20 at bats, a .700 average. That’s top-notch, but perhaps more telling was what caught the eye of Dave Good, a Western Exterminator player out with an injury but in uniform on the bench supporting his team. “The women players tend to be more positive and supportive and have more fun. They really play for the pure joy of the game,” he said.

Schneck and the other players agree that softball gives them an opportunity to be social, stay active, and offers continued friendship with teammates as well as a relationship with the game many have been playing for decades.

Janice Mihora, another Ranch resident, missed the game because she was competing in a golf tournament here. She didn’t start playing softball until high school in 1972 when Title IX provided girls with equal sports opportunities in schools. She played in women’s competitive leagues until her late 20s and at SaddleBrooke for five years in three different leagues. Like others, she started because she loved the game and now enjoys the competition, exercise, and friendships she’s formed. Her favorite softball memory was having her grandchildren watch her play recently and cheered “Go Grandma!” as she ran to first base. Her husband, Terry, also plays in the league.

Win or lose, Schneck and Mihora are having the time of their lives. Janice summed it up best: “During all my years of working and raising a family, it never occurred to me that I’d be playing softball in my 60s. But when I moved here, I jumped at the chance to relive a little bit of my youth. Playing here has been a real blast!”