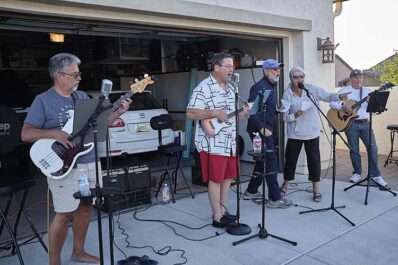 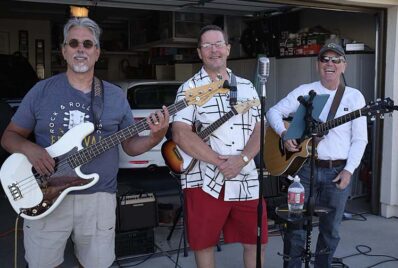 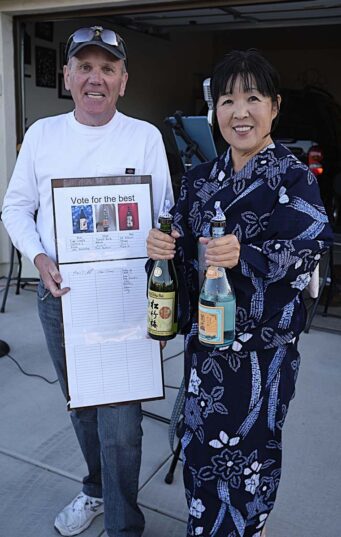 Karl and Madoka Knight announce the results of the sake tasting, hosted by Madoka at the Unit 8A 74th Happy Hour. (Photo by Bob Authur) 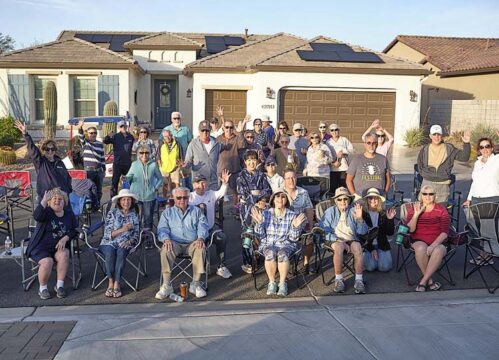 Residents of Unit 8A pose with members of That New Band for the Unit’s traditional Happy Hour picture at their 74th Happy Hour. (Photo by Bob Authur) 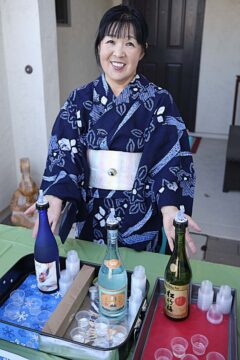 Madoka Knight, dressed in a traditional Japanese kimono, hosted a sake tasting table at the Unit 8A Happy Hour on April 20. (Photo by Bob Authur)

After 73 happy hours, it is not always easy for members of Unit 8A to come up with fresh ideas for their monthly happy hour gatherings. But, the unit did it again with “Sing, Sip, and a Sunset” at its 74th happy hour on April 20.

Planning for the 74th happy hour started with an invitation to the SaddleBrooke Ranch trio, “That New Band” (T.N.B.), to play for the driveway event. T.N.B., comprised of Ranchers Andy Waddell (vocals and ukulele), Jay Hall (bass guitar), and Unit 8A’s own Karl Knight (guitar), was the perfect entertainment for the evening. Together since October 2021, the band plays for fun, with a playlist that includes well-known pop music from the ‘50s, ‘60s, and ‘70s.

Throughout two sets of songs, the band encouraged guests to dance and/or sing along from their chairs and the driveway “stage.” The 30-plus Unit 8A residents and band guests enthusiastically joined in, albeit sometimes slightly off-key. Residents Marvin Soskil and Shelley Ziegler gamely added their voices and moves to the band’s rendition of a group favorite, “Sweet Caroline.”

As an added bonus to the evening, Unit 8A residents Karl and Madoka Knight set up a sake tasting table featuring three varieties of sake. Madoka, beautifully dressed in a traditional Japanese kimono, graciously served the sake to all tasters. Guests then voted on their favorite and, at the end of the evening, Karl announced the rankings. Interestingly, the least expensive sake received the most votes, and the most expensive the fewest. Regardless, as Karl says, “the more tasting you do, the better the music will sound.”

The event was almost derailed by the wind, with gusts up to 30 mph that afternoon and evening. Undeterred, the band agreed to give it a try on Paul and Kate Thomsen’s sheltered driveway, Madoka tucked away the tasting table on the Thomsen’s front patio, and guests came prepared with sweatshirts and hoodies. All agreed it was one of the most fun happy hours to date.