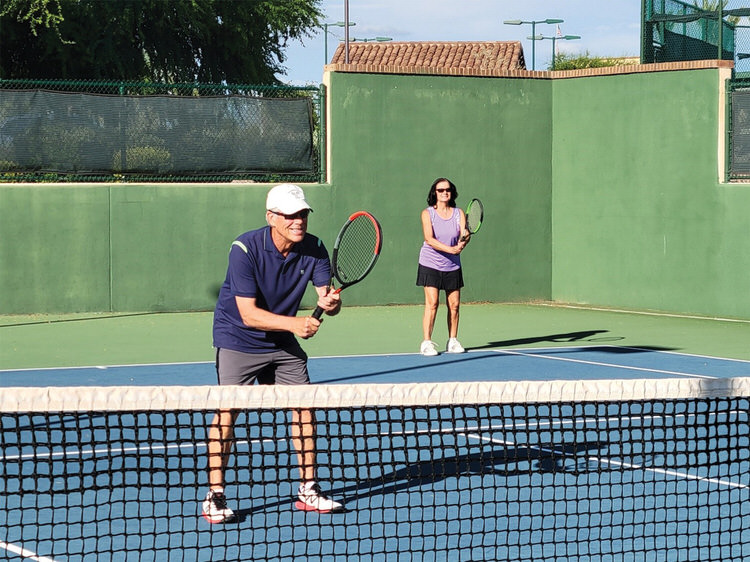 Terry and Anita Zimmerman moved from Lincoln, Neb., to SaddleBrooke Ranch in 2016. After arriving and settling into their new home, tennis served as an activity they could do together.

Anita has played tennis for more than 30 years. In Nebraska, she played 3.5 Ladies United States Tennis Association (USTA) for 10 years. After moving to Arizona, she joined USTA Southwest and played 3.5 Ladies USTA for three years. Most recently, she has enjoyed playing Ladies Interclub tennis on the SaddleBrooke Ranch team for four seasons. Since joining the SaddleBrooke Ranch Tennis Association (SBRTA), she has served as co-chairperson for the Events Planning Committee with Terry, and served on the Ratings Committee and several Steiness Festival committees.

Terry started to play tennis after moving to SaddleBrooke Ranch in 2016. He learned by attending the Monday morning development classes with Dean Alfrey. He reached his 3.0 rating on his third attempt through the SBRTA rating sessions. He has watched the club grow from two tennis courts to the present six courts. Terry has served as co-chairperson for the Events Planning Committee and is on the Court Scheduling Committee.

Both Anita and Terry enjoy the many friends and the exercise that tennis provides them. You will see Terry and Anita on the court several times a week.