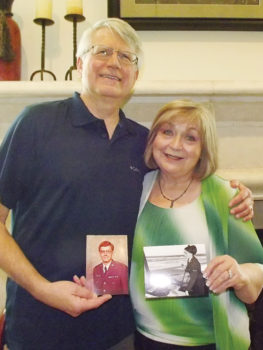 Hank and Linda are proud to have served our country by contributing to its safety. Hank, educated as an aeronautical/astronautical engineer, began his career in the military when he enlisted as an aircraft mechanic and was stationed at Columbus AF Base, Mississippi. Next he was commissioned and assigned to Wright-Patterson AF Base as an aeronautical engineer where he managed contracts in automatic flight control systems. Here he was involved with joint Air Force and FAA development programs to improve aviation safety. Several high-profile plane crashes due to wind shear motivated more safety during landings and take-offs. Hank says, “It doesn’t matter what is painted on the outside of a plane, they all have the same problems with nature.” Hank next went to work for IASCO (International Air Service CO) for FOUR years. AT IASCO, where Hank and Linda met, he started his professional career as an airline pilot. Later while working as a pilot (for 30 years) for Federal Express, he actually saw improvements in air safety resulting from his Air Force work.

Linda joined the Air Force after graduating from high school. She enlisted for four years and added another three years when a shortage of Air Traffic Controllers offered a lucrative re-enlistment bonus. She began her training in Biloxi, Mississippi. Her seven years of experiences in air traffic control at Otis AF Base in Cape Cod, Mass., Yakota AF Base in Japan, Loring AF Base in Maine, and Wrights-Patterson AF Base in Dayton, Ohio, prepared her for six additional years as an Air Traffic Controller for the FAA at the Minneapolis Center and Dayton Approach Center. In 1981 President Reagan fired 12,000 air traffic controllers, (Linda one of them), who went on strike. Linda was asked to return but decided to work at IASCO in the air dispatch department, working there until 1983. Following IASCOI she moved on to Flight Operations at FedEx Corporation. While at FedEx she received a BS in Organizations Management, an MBA, and a degree in Financial Planning. From then until she retired after 22 years at Federal Express as Managing Director of Air Operations, Linda was involved in air safety. Linda says that the Air Force was a life-changing experience, not only in career development but also in cultural experiences. One of her most satisfying experiences was serving at Yakota AF Base in Japan. A hospital on the base served as a stopping place for those injured during the Viet Nam war. Her mission: air safety for all those coming and going.

In 2008 a friend, Jan Martin, decided to look at property in AZ. Linda went along. After Hank came to look, both parties (from Tennessee) bought SBR property. Linda and Hank’s house was the sixth house here. They love the camaraderie at the Ranch, becoming full-time residents in 2011. “We are all new and in the same boat. Just like the military.”