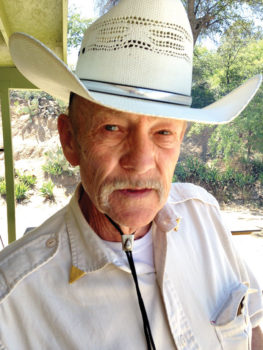 Thursday Talks is proud to present to our SaddleBrooke Ranch neighbor William T. “Flint” Carter to speak on Thursday, May 19, at 4:00 p.m. Flint is a seasoned prospector who has mining claims in the Santa Catalina Mountains north of Tucson, Arizona. After 40 years, Flint knows all about the mountains, its legends and its precious minerals.

Carter has staked mining claims throughout the Cañada del Oro and the Santa Catalina Mountains since he arrived in the early 1970s. While living north of Tucson, Carter was introduced to the legend of the Iron Door Mine by Burton Holly, the man who helped build Hollywood. Carter researched the history and mining of the Cañada del Oro (Canyon of Gold) and explored the legends of the Mine with the Iron Door.

Hidden deep within the majestic Santa Catalina Mountains are ancient ruins that may be linked to the legends of the Mine with the Iron Door and the Lost City. The remains of nearly a half dozen stone constructed buildings are scattered in an area that is suspected to be connected with the famous legend of the Mine along with remnants of extensive mining activities, conducted for hundreds of years. Evidence of mining shafts, tunnels and early human activity have been found and documented. The U.S. Forest Service retains these items. Much of the legend and history are tied to the Spanish missionaries that came to Arizona in the early 1700s.

Recently, William T. “Flint” Carter collaborated on a book written by Robert Zucker called Treasurers of the Santa Catalina Mountains. He is a problem solving design consultant specializing in mining and environmental reclamation, CEO of Celebrity Stones, curator of the Mine with the Iron Door Museum, director of the Santa Catalina Historic Preservation, executive consultant of the 3C Ranch and Oracle Inn in Oracle, Arizona.

Come learn more about our local area by this colorful story teller. See you on May 19.