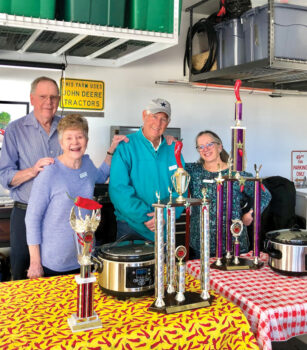 Steaming electric Crock-Pots filled with savory and spicy chilis lined the walls of Marge and Jim Rodgers’ garage on Happy Jack Trail. Folding tables groaned under the weight of the bubbling pots and the wide variety of cornbread dishes and assorted sweets. Mouthwatering aromas from the contestants’ favorite recipes wafted deliciously out the garage door and down the block as Unit 16B residents held their second annual Chili Cook-Off on Friday, Feb. 18. Due to a yearlong COVID delay, competition among the eager contenders was fierce. The age-old debate of “to bean or not to bean” in a chili masterpiece became the question as residents taste-tested each entry. Anonymity of the contestants was a cook-off rule. All chefs ladled out their competitors’ chilis to the delighted and hungry residents of 16B.

After sampling each entry, everyone received a packet of three “magic” beans to vote for their favorites. Residents resembling double-agents stealthily placed their voting beans into the covered jars in front of the entries. Finally, it was time to crown the kings and queens of the 16B Chili Cook-Off.

A hush fell over the crowd, as John Green—official “bean counter”—tabulated the results and Pete Watson prepared to announce the winners. In third place were Dave and Peg Malphurs, with a delectable recipe Peg created for the first time. The couple won a $10 Ranch gift card and a third-place trophy sporting a gigantic chili pepper. In second place was Jim Rodgers’ spicy chicken and bean chili. Jim won a $15 Ranch gift card and a garishly ornate trophy with a red pepper topper. The grand prize winner was Nini Frank, whose delicious chicken and green chili recipe received the greatest number of voting beans. Nini won a $25 Ranch gift card and an enormous trophy, which may require front door modifications to fit into her house.

The fun-filled Chili Cook-Off gave residents, new and old, an opportunity to celebrate together after the long COVID drought. A huge thank-you goes to the 16B activity committee for making the event possible, to Jim and Marge Rodgers for hosting the event, and to all 16B residents for their great attendance. All winners of the second “almost annual” 16B Chili Cook-Off are prominently displaying their trophies. Ranch residents driving through the unit may feast their envious eyes on these spectacular and “peppery” trophies located in their front windows.